What is an Adventure? 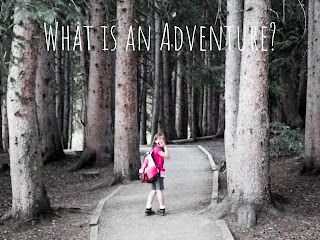 The sun crept behind the distant horizon. Sally had ran out of time. The thick foliage made running difficult and the scrapes on her knees burned with each step she forced herself to take. She wondered if this was even the right direction because no matter where she looked branches filled with dying leaves filled her view. But she couldn't stop. They were still out there. The next step she took found a fallen branch that snapped under her weight.
"Gothca!" a voice said from the shadows.
"No!" Sally said. Noise didn't matter anymore. She ran as fast as she could propel herself. Branches scratched at her face and arms but she pushed through the pain. She heard footsteps behind her and they were gaining on her. She saw a light come on in the distance. A light that seemed to be a beacon of hope and she found a surge of relief. She was going to make it.
"Mom!" Sally said bursting through the trees and cutting across the lawn. The footsteps ceased to follow when she reached the tree line. Her two older brothers watched from the darkness like two predators that had let their meal slip through their claws.

So, what does that have to do with anything you ask? Everything. It is intended to allow you think about what adventure is. A child has multiple adventures each day. Whether it's because they are using their imaginations or because they are experiencing something new. To them it's all the same and it's fun. Hopefully you were sucked into Sally's adventure for a moment as you wondered who she was running from and why. Maybe you were let down to find out Sally was a child. Maybe you were relieved. I'll never know but it was fun. To be fair the scenario I've written here was only fun to two of the three but I guarantee that little sis had just as much fun as the punishments were enforced later that night. That's just part of the game.
Adventure is built into our DNA. We need it. Without it the new world would never have been discovered (okay bad example but you know what I mean.) Lewis and Clark wouldn't have explored the country, Armstrong would have always wondered what it would have been like to walk on the moon and you would never have gotten that date to prom. Does this mean that an adventure has to be perilous? No. It can be anything as long as you are on the path to discovery. Taking in the countless artifacts in a museum can spark your inner Indiana Jones. Hiking a well worn trail you've never traversed may be old to some but it's new to you. There are no limits. Make your adventures as perilous or as easy going as you'd like and like a child, use your imagination. An adventure is whatever you do that get's you away from the everyday and makes you happy.
I've read the definition of adventure according to Webster and he did a pretty good job. He makes it sound exciting. He makes if sound fun. It sounds like something that would make a kid happy and I don't know about you but most of the kids I've seen are a lot happier than me. If you can relate to that than you my friend need to get out more. So enough of this. Let's go discover something new. Let's go find our own definition of adventure.

Next week we'll explore some of my favorite places to visit and how I get there. Stay safe.