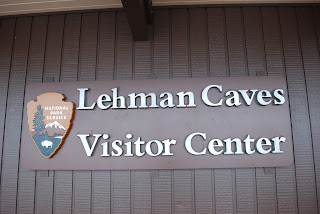 Stretching across the United States from Ocean City, Maryland all the to Sacramento, California is U.S. Route 50. At over 3,000 miles this highway cuts the country at pretty much it's mid point. Along the route you will find Civil War battle fields (Chantilly, Virginia), a president's home town (Harry S. Truman, Independence, Missouri), and several small, unique towns. But once you reach Nevada things change.
The Nevada section of Highway 50 has been nicknamed "The Loneliest Road in America." Personally I think that could moniker should count for part of the Utah section as well but whatever. If you research the road much on the interwebs you will find that there were a lot of changes to the route, minor controversies, and a lot of people warning you not to travel this lonely road unless you have Bear Grylls type survival skills. But if you ignore the history and keep a little extra food and water in the car you can find a hidden gem along the route, Lehman Caves.
Lehman Caves can be found inside the Great Basin National Park. Designated a National Park in October of 1986, GBNP sees around 90,000 visitors per year with 50,000 visiting Lehman Caves. This stat makes no sense to me since it really is the highlight of the park but I took that statistic right from the National Park System's web site. I went to see the cave and drive the 12 mile Wheeler Peak scenic drive. Of course nothing ever goes as planned and since we were here for Memorial Day weekend we endured a pretty good snow storm which closed all the roads in the park except the one leading to Lehman Caves Visitor Center. Since I had only one day to explore I had to be happy that I at least got to see the caves. 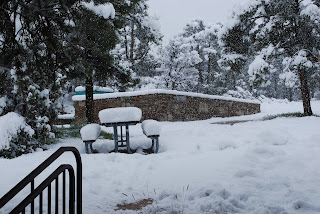 There weren't a lot of people there that day which was good since it kept the tour group pretty small. All tours into the caves are ranger guided and your tickets should be reserved in advance so as to make sure you can get in. You don't want to drive all the way there and not be able to get in. Inside we learned about the caves discovery by Absalom Lehman in 1885 and how early visitors were allowed to break off pieces of stalactites as souvenirs.One part of the cave system is even littered with graffiti. We also learned about cave "bacon" which I didn't know was a thing until then but once you see it you understand the thought behind the term.
The caves are lit and are around 45 degrees year round so bring a sweatshirt. There is a point during the tour that they turn off the lights to give you a sense of just how dark it gets inside the Earth. No surprise it's damn dark but way cool at the same time. 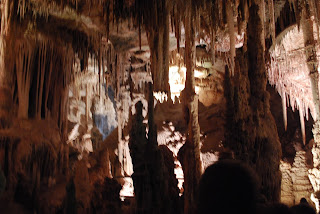 I won't lie. I was disapointed that Mr. Plow couldn't clear the roads up to Wheeler Peak that day but I guess it gives me a reason to return to the park someday. Overall I did enjoy the caves and has inspired me to put Carlsbad Caverns on my list of places to see someday. Yes it's a long and lonely drive to get there but if you know you're going to be traveling highway 50 through Nevada make sure to use this place as a reason to stretch your legs. It's worth stopping by. 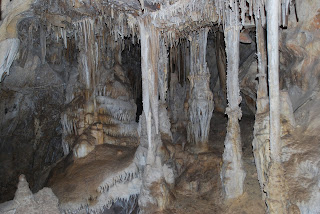