Easter Jeep Safari 2016 Round Up

Easter has once again come and gone leaving one more Jeep Safari in our rear view mirror. Moab can now calm down a little until next spring. We were able to see a lot of fun new products from manufacturers in the off road industry and we even managed to allow ourselves to be sucked in to a couple of booths to make some purchases of things I'm not sure that I really needed but I'm glad that I now have (I'm sure some of you know what I'm talking about.) Once I get an opportunity to try these products out I'll let you know what I think of them. 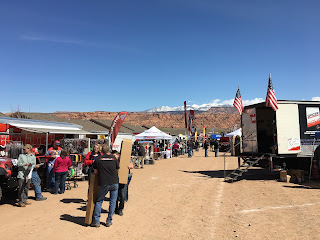 Unfortunately due to our group of characters being scattered around the state and a lot of issues with registration we were unable to actually sign up for an official trail this year. That's okay by me because I've officiated these trails over the years and to be honest I like taking smaller groups out. It's quiet, simple and much more personal and you always have time to stop and see whatever you want whenever you want. It's also a better environment for newer four wheelers such as one of the guests we had in our camp this year. We took them out on the Fallen Peace Officer Trail for their first off road experience. This trail isn't exactly difficult but there are enough spots to test and train a driver with a stock vehicle to see how they will handle the experience. I have to say that I'm now more impressed with Jeep's Trail Rated Badge than I was before. With a little guidance and a capable vehicle I once more got to see a nice couple learn what it's like to travel off the beaten path. I hope to see Jay and Linda return to travel with us again soon. 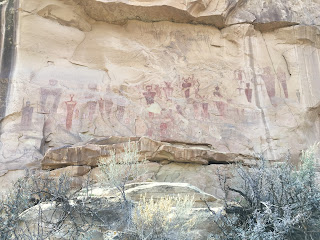 Without a trail for Big Saturday we chose to get away from the crowds which led us back to the ghost town of Sego. Much of the stone and brick buildings have remained the same as they were on my last visit five years ago but the wooden structure that had been standing is now no more than a pile of broken lumber. This had been a rumor to me that is obviously now confirmed. Sad as it is to see it toppled it didn't ruin the trip. As I said there are still a lot of buildings scattered through Sego Canyon that are still well preserved and worth the drive out to see them. After leaving Sego we chose to take the backroads back to camp which led us through Arches National Park. There aren't a lot of parks out there that still have dirt roads that you are allowed to traverse so if you choose to visit please be respectful. If the roads remain as washboarded as they were for us you will only dream of reaching the speed limit of twenty five. It was rough.
We rounded out the weekend by taking a quick run to the Pickle trail. This happened to be after our trip to Sego and Arches so for the second time during the week we got to use our drive lights (and we also got to cook dinner by the light of a Coleman lantern.) We had a couple of vehicles in our group that needed to be tested on something a little more challenging than the site seeing tours that we had been taking them on and with it's close proximity to our RV park it, the Pickle just made sense. Three of the six vehicles in our group tried the first obstacle with only two of them making it. It would have been three but the air compressor running the ARB lockers just gave it up at the wrong time for one of them. Sorry Makenna. You'll do it next time. The other two vehicles had no trouble with the rest of the trail and they met up with the rest of the group just as darkness settled in.
In the end I had a blast once more in Moab and of course I can't wait until the day I can return. There are so many places to see in the Moab area that you just won't be able to see them all in one trip. Heck, I've been a regular since 1989 and there are still things that I haven't seen. You don't have to be a Jeep guy or gal to head down there either. If you like to hike, raft, rock climb, or mountain bike there is something for you there. Thank you to the Red Rock 4-Wheelers for hosting another successful Easter Jeep Safari and congratulations on 50 years. I can't wait for 51. Thank you folks for reading and I'll see you on Friday.