It's been about two months since our Southern California vacation where we took in the rides of Disneyland, the history of the U.S.S Midway, and the great creatures of the oceans at Sea World. My daughter had never visited Sea World and my son was too young to remember it so it was high time we went down and checked it out. What I've learned since that trip is that, aside from the Orca and Dolphins, most of the animals we saw could be seen here in Utah. Yes, Utah.
The Loveland Living Planet Aquarium located in Draper, Utah is somewhat an oddity here in my opinion. We live in the desert here. We have mountains full of deer, elk and bear. There are antelope that graze in the fields just a few miles south of my home. Nowhere do I see sandy beaches and crashing ocean waves from where I live so the aquarium to me is just out of place. But that doesn't mean that it isn't interesting.
The aquarium has many exhibits that will appeal to anyone interested in marine animals. They have a petting area where you are allowed to touch sting rays and small sharks much like SeaWorld.  They have a few different types of jellyfish and each one is equally creepy and they have a large shark tank with multiple species of shark, sting rays, and sea turtles plus, like SeaWorld, they have a tunnel that you can walk through and get an up close view of these animals. When I visited SeaWorld their tunnel was closed for some reason so this part of the museum was probably the highlight for me. 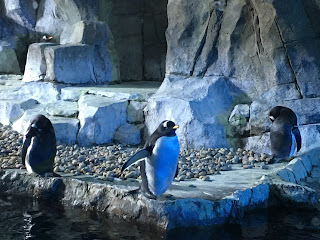 Of course the animals that get the most attention are the penguins and the river otters. The penguins are housed in the Antarctic Adventure section of the aquarium and aside from being a bit dark the exhibit did give you room to see the penguins and still have room to breathe. The river otters are located in the Discover Utah section of the aquarium and is the exact opposite of the penguin area. It is well lit but there didn't seem to be enough room to see the animals. It's a tight space that on a busy day (which it was) just doesn't allow you to view the otters unless you are extremely patient or a little pushy. In fact I didn't even attempt to take a photo because there were just too many people huddled around the glass and the otters seemed to like the attention and stayed close to the glass as they played.
I do like the Discover Utah section because it is dedicated to animals that you find in the wild here. Snakes, fish, and even duck species that call Utah home have a place here. If you sneak past the crowd at the otters you can get an up close encounter with a Wood Duck which I haven't personally seen in the wild in Utah but they do pass through.
So do I like the aquarium? Eh. I've mentioned SeaWorld in this article but I'm not really comparing the two. They are different. But I did want to point out the similarities. I think they spent a lot of money building interesting "worlds" but the payoff leaves a bit to be desired. The Journey to South America is a large room kept warm and humid for the animals housed in it and a lot of them have free run of the place so keep your mouth shut if you're looking up. There seemed to be few animals to justify the size of this exhibit. I did enjoy seeing King Crab alive and well and not on a plate. It was cool to see the actual size of those dudes, pretty impressive. They are located in the Antarctic Adventure on the level below the penguins. Overall I think it's worth visiting at least once but it won't be cheap. An adult ticket is just under $18 and a child's ticket comes in under $13. I guess it's cheaper than going to SeaWorld if you want a stingray fix. Check it out for yourself, though. Their web site is http://www.thelivingplanet.com/ if you want a preview.
I'll see you on Friday when we get in to those Jeep Safari must haves I promised. See you then!