Brandan knows me too well.  He said I would jump on getting passes to Magic Mountain and I did.  They had a sale and I took the bate.  So far we have had the passes for three days and we have been two of them.  The kids are loving being so close to all of these amusement parks.

We entered the park and found the first ride we could.  I promised my daughter that it wouldn't be that bad.  I had to apologize later.  It was an intense track of twisting and turning that she wasn't prepared for.  There may have been tears shed.  The ride was X2 and here you can see a video of what she didn't love from a video we found off YouTube.  Keep in mind that the video doesnt do the ride justice at all.  We also rode Superman Escape from Krypton, Ninja, Tatsu and finished it off with Roaring Rapids.  We got so wet in the last ride we decided to go get a choco taco and then we went home.  That's the magic of the passes, we love to stay for 4-5 hours and not feel like we need to drag on to get our value from the passes.

The park crowds were awesome with most lines being 15 minutes or less.  I cant think of a time in Disneyland that we could ever let the kids get this far and still be able to see them. 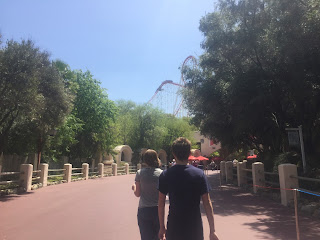 We rode most everything we walked by but the hit of the day was Superman.  It was getting warmer and the cooled tunnel part of the line was awesome.  It also made you feel like you were walking right into the movie.  The ride was a quick blast that had us all thrilled. 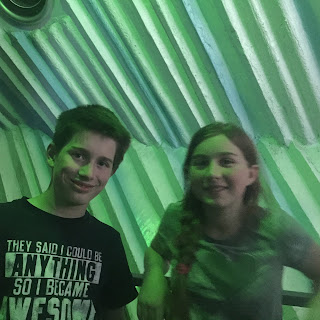 The front of the ride was pretty cool too! 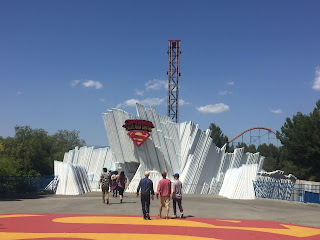 The second day the crowds were even better with some rides having no lines at all.  We even rode one ride twice with out getting off because there was no line behind us.  We can now say that we were once the only three people on a roller coaster for one full ride.  It was magical.  We rode the new Revolution VR ride first.  It was a typical roller coaster but we had special VR glasses that showed an interactive pilot game.  I wont ruin it for you but it was a one of a kind experience.  We also enjoyed Batman the ride, Gold Rusher, the Flash Speed Force,  the Swashbuckler,  Wonder Woman Lasso of Truth and Jet Stream.  The Jet Stream was like a log flume ride but fast.  The drop at the end was huge!  We got wet but not drenched.
The food there has been fun too. The kids want to try all the different kinds of Dippin Dots they have.  I want to refill my 2016 free refill bottle 100 times this year.  We all have our favorite treats and this park can meet all of our wishes.
I'm sure we will be back a dozen more times this year.  Its literally a 10 minute drive from the door of our home to the parking lot.   Ill try to get more pictures then.  I was too busy having fun to keep a camera in my hand.  When we finally get settled in here we will break out our GoPro and give you a more visual experience of our adventures.  On to the next adventure. See you all soon.