The Wizarding World of Harry Potter

The call of the magic was to strong to avoid.  I promised we would go back and cover more in the first post A Glimpse into the Wizarding World of Harry Potter. We went back to dive deeper in and loved every minute of it. 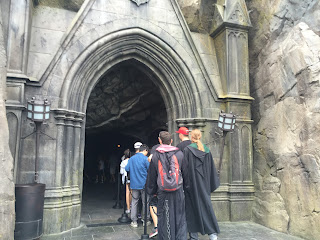 We got to the park just after opening and went straight back to Harry Potter and the Forbidden Journey right away.  There was a method to the madness here.  Every time I heard about this ride I was told of the motion sickness.  We went first thing on empty stomachs to avoid an embarrassing issue.

The line to the ride was as enjoyable as the ride itself.  You walk in through a huge stone passage way and it takes you away to a fully immersed trip through the classrooms and hallways of Hogswarts.

As soon as you enter the doors you are met with an attendant who instructs all with carry on items to use a free locker to store their things in.  This was a lifesaver.  You unlock and lock the locker with a fingerprint which was simple and convenient. 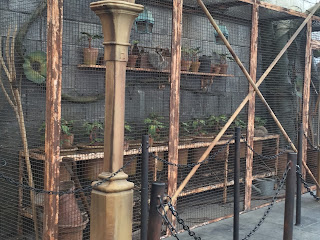 After you lock up your loose things you move on the line that begins in a giant green house.  Its covered from the sun but I could see this getting really warm on a hot day.  As the line winds up to enter the building you can see a row of Mandrakes ready for plucking.  The cry of a Mandrake is fatal to anyone who hears it so lucky for us they remained quiet.

From here we entered Hogwarts and I need to apologize.  The place was awesome.  It was true to the story and plenty entertaining for the wait.  It was also very dark.  This meant that I couldn't take the million pictures that I wanted to unless I wanted to be that one person in the line blinding everyone with the constant flash of my phone camera.  I promise to come back and update these pictures when I can bring a better camera with better light options.  For now you have dark and grainy pictures that with enough imagination can still tell and enthralling story. 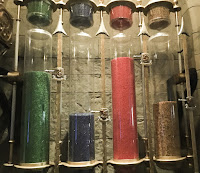 The house points were on the wall and it looks like Gryffindor was still carrying a substantial lead on the others. There were also a few statues and paintings on each side to keep you in the magic.  I feel like I should know who or what these are of but I didn't so Ill leave it up to you to tell me the stories behind these.  I've posted a series of pictures at the end of this post. 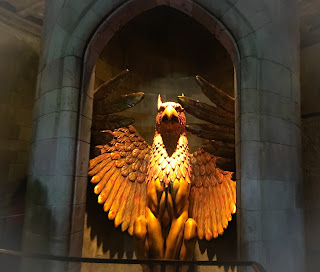 As you walked along the hallway you could see the entry to the Headmasters Office guarded by a large Gargoyle. 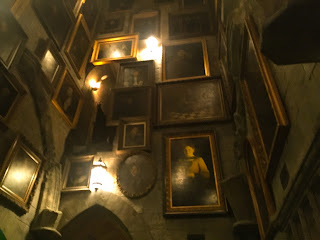 Around the next corner the halls were lined with paintings, many of them moving like in the movies.  They did a great job on these.  I expected them to look like TV's playing a video but they really looked like a moving painting.  Great job props department! 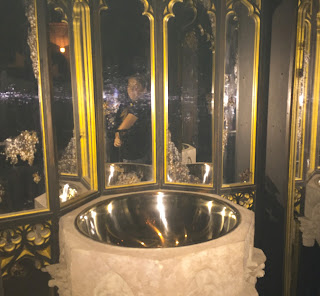 Harry Potter: "What is it?"
Albus Dumbledore: "This? It is called a Pensieve.  I sometimes find that, and I am sure you know the feeling, that I simply have too many thoughts and memories crammed into my mind."

We all need one of these at home.  A place to store all of our memories would come in handy.

Across the room the Headmaster himself was there telling us about the goings on in the school.

From there the line got darker.  There was a point where Harry, Ron and Hermine were telling us about the ride but I couldn't get a decent picture.    The sorting hat looked down on us as we walked in and we were loaded onto a flying bench and fitted with 3D glasses. 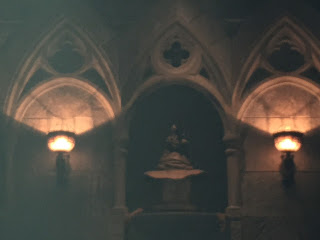 It only took a few seconds on the ride for me to know that the glasses needed to come off.  It was probably my mind telling me I might get sick but the 3D was not sitting well with all the swaying movement.  We were taken through the grounds past the Whomping Willow, through the forrest filled with spiders and we even came across some Dementors along the way.  We followed Harry on his broom and it was a fun journey for sure.  At the end of the ride I was hit with a slight scent of vomit and I was thankful I thought to take off my glasses.  Faith took hers off as well but the boy child is tough and managed to keep his on the whole ride. There are garbage cans all over at the exit of the ride in case you aren't lucky enough to skip the motion sick part of it all. 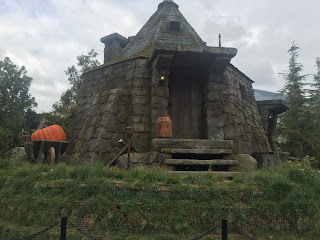 After the ride we went over to the Flight of the Hippogriff. The line there is complete with giant pumpkins and Hagrids Hut.  You can also see the back of a giant nest but you cant see inside it until the ride. 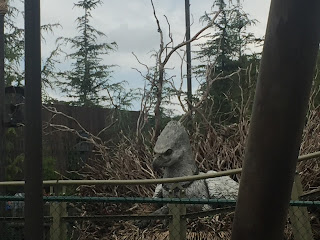 Its a fast moving roller coaster that takes you past Buckbeak's nest and on a quick flight.

We continued to tour the world of Harry Potter for the next while.  There really is a lot to see here.

Honeydukes and Zonks Joke Shop are connected at the front of the area and brightly painted.  This is where you can get all the tricks and treats from the stories like chocolate frogs and jelly beans with disgusting flavor's mixed in. 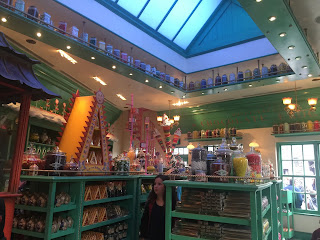 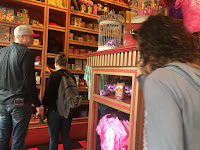 The windows in the park are a whole story on their own.  They are filled with magic you can be a part of.  We even got videos of this to upload to our YouTube page.  I cant wait to share them with you.  But for now you will have to wait.  They will be covered in their own post since there is so much to cover there.  Just know that you too can wield a want and be a witch or wizard in this magical place.

Life is either a great adventure or nothing- Helen Keller 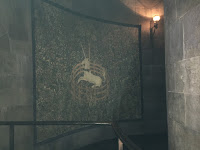 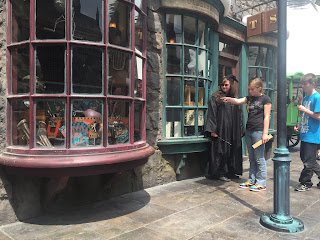 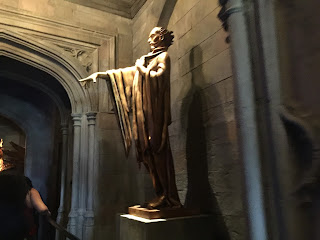