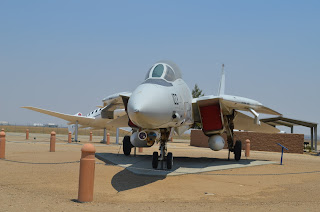 It's Saturday morning and you have no plans. The hot, musty garage needs to be cleaned but that doesn't really sound like fun. The scent of last nights dinner still crawls through the house, a reminder of the pile of dishes awaiting your attention. So what is one to do? Get the hell out of the house of course.
We chose to take a half day road trip to once again explore our new surroundings and through research we learned of a small airplane museum less than an hour away in Palmdale, CA. So we filled a cooler with water, grabbed some snacks and the camera gear and headed out. I suppose those dishes will just have to wait, there's some exploration to do and we had a destination. We were heading for Joe Davies Heritage Air Park.
We decided to get there earlier in the day considering the temperatures have been hovering around 108 degrees lately and this is an outdoor exhibit. It seemed that we were rewarded with beautiful sunny skies and only two other people in sight, a rarity here in California.
Joe Davies Heritage Air Park is located at Palmdale Plant 42. What is Palmdale Plant 42? It is a United States Air Force facility that is home to names such as Boeing, Lockheed Martin (Skunk Works), and NASA. Here aircraft have been designed, built, and tested since the nineteen thirties and is currently where the F-22 Raptor, F-35 Lightning II, and others are being put through their paces. 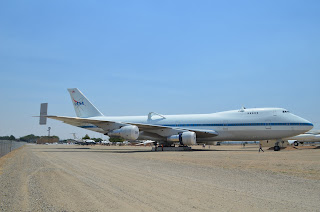 Plant 42 also has a deep history with NASA and on display is a 747 that was used to transport shuttles from Palmdale's assembly plant to Kennedy Space Center where the orbiter would blast it's way out of the atmosphere.
Here on terrafirma we can see an F-16, a C-46 Commando, and space shuttle evacuation sled nicely displayed with concrete paths that weave through the exhibit and they've sprinkled in some shade trees to help keep you cool on those extra warm days.
As an added bonus there is another small aircraft museum just across from the parking lot of Joe Davies. This one is the Blackbird Air Park. This museum is a kind of annex location of Air Force Flight Test museum. This location pays tribute to the Lockheed SR-71, a favorite of mine as a kid. Next to it is an A-12, the predecessor to the SR-71. The small trailer next to the exhibit is full of old photographs, posters and memorabilia that you can browse through. The volunteers inside are really, really knowledgeable about these planes and their history. I didn't get out of there in a hurry that's for sure. I learned a lot about these planes and the fellas inside love to teach you about them so make some time to listen to them. It's fun, trust me. 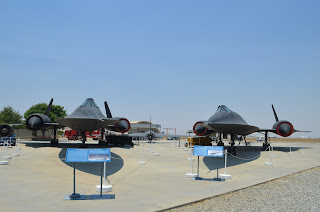 Overall it was worth getting out of the house to head up their. We got to learn something about really cool airplanes like the F-100 Super Sabre, once a member of the famous Thunderbirds and we got to get away from the house. This is just another example of the things you didn't know existed until you went looking for them. The bad news is that now we have to go do those pesky dishes.
Joe Davies Heritage Air Park is free of charge and is open Friday through Sunday 11 am to 4 pm. Learn more at http://www.cityofpalmdale.org/Airpark and http://afftcmuseum.org/visit/blackbird-airpark/ .

Have a great week!