A 4th Of July Tradition :Yellowstone 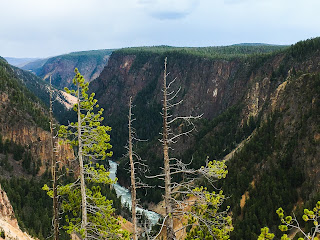 Ah the Fourth of July, America's birthday and a reason to fire up the grill and cook up some burgers and dogs (not that we really need a reason.) Millions of folks get together with family and friends to catch up, have some grub, and light off fireworks well into the night. It's a great time. But we choose to spend our 4th of July celebrations away from home. In fact we like to spend our nations birthday by visiting the world's first national park, Yellowstone.
Yellowstone National Park was created in 1872 but it has always been a special place. It's sheer beauty and geothermal features make it one of the most treasured places on the planet and 3.4 million visitors a year can attest to that. It certainly brings us back year after year. For some reason this place never gets old to me. I love being in these mountains and it if difficult to leave each and every time. The temperature is right where I like it and the weather usually isn't too bad. This year however, it seemed to want to rain right when we were cooking dinner. Every day, like clockwork. That's okay though, we were prepared for the weather because that's just part of the game.
We set aside three days to explore the park this trip which, again, wasn't enough time but we made the best of each moment. In total we had ten of us together for the first time in eleven months. Two of us flew in from Chicago, four of us came in from California, and the rest of the group was in Salt Lake City where we all met. From there we loaded up our motor homes and rolled down the highway for the six hour trip to West Yellowstone, Montana. Our final destination was the Grizzly RV Park which almost literally is a stones throw away from the West Gate of Yellowstone and makes for a great viewing spot for the 4th of July fireworks show. You can't imagine how nice it is to just pull a chair out next to your RV and enjoy a great fireworks display without fighting the crowds afterward. If you're looking for a convenient location with a friendly staff make sure you look this place up.
So what was good? The park's wildlife did not disappoint (it never has) and we were able to get plenty of photos of American Bison, massive bull Elks, and deer. The bear remained elusive to us this trip, which was a disappointment to my daughter but them's the breaks. The highlight though was the chance to get within fifteen yards of a juvenile Bald Eagle, a symbol of America. Outside of an aviary I had never gotten that close to a Bald Eagle. He perched himself on a rock just off the road and allowed a large, photo snapping crowd to gather at his feet. I  think he sat there for fifteen minutes before flying off leaving the crowd to focus on the cow Elk and fawns that had squeaked past us when our backs were turned.
Old Faithful is still reliable and we arrived five minutes before it went off which was very convenient. We noticed that the Mammoth Hot Springs were dryer than they were the last time we were here, in fact I'm not sure I've ever seen them this dry but it was still a beautiful site to visit.
And what was bad? The people. Okay so this is a catch 22. Having people in the park brings in money for the parks, which is good. But people in the park brings traffic. We had to be very patient trying to get parking spots at each and every site we stopped at. We had to resort to getting into the park a little earlier than normal in order to get ahead of the crowds. That again is a catch 22 because although you beat the crowds you may not get to see these sites as well as you would later in the day. This is because the cool air of the mornings and the warm waters of the park create a lot of steam. This alone is really cool to see but it can be really thick and will cover all of the features of the sites. This is the exact reason I don't have any colorful photos of the Grand Prismatic Hot Spring. Too much steam. 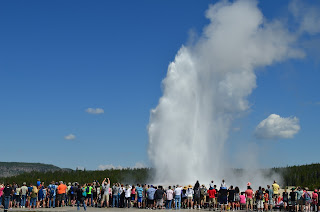 Recent, tragic incidents have plagued the park this year and after this visit I can see why. People just don't seem to value their safety. The ranger at the entrance hands each driver a newspaper, a map and a flyer. My guess is that those papers are tossed aside in the excitement of being in the park and no one bothers to read them. The flyer gives you information on how far away you are suppose to be from certain animals (you know the ones that want to kill you) yet you will constantly see people trying to get closer and closer to the wildlife. It's a site to see in and of itself. Luckily no one was injured or even chased around while we were there but I was within ear shot of a really good lecture that a ranger was giving a large crowd observing a Bison from across a small river. Not five minutes later the Bison was on our side of the river and the ranger was ushering people back to their cars. This is a common sight around the park and unfortunately incidents happen from time to time.

Come back Friday as we wrap up our Yellowstone trip and look forward to our upcoming adventures. See you then. In the meantime you can see our daughter Faith's video report on her time in the park below. See you Friday.