A Trip Back in Time at Bob's Big Boy 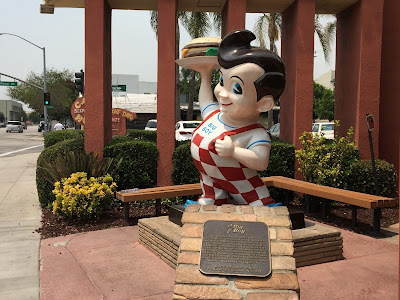 We love a good dose of history. When we found out that we were very near the oldest remaining Bob's Big Boy in the United States we had to stop by and visit. Located at 4211 Riverside Drive in Burbank, California, this place not only holds restaurant history but has had its place in a few notable films as well. There was an electricity to the place you have to be there to explain. It was like being a part of a secret club. The walls were decorated in a way that made you feel like you stepped back in time.  Back to the 1950's. 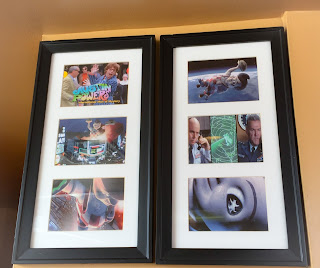 The Beatles even had their favorite booth there. There was a family eating in it at the time so we didn't snap a picture but you can read all about it here. When you go there to see the booth look for the plaque on the wall. There were many pictures on the internet that were not of the right booth. (Hint, its by a window not a jacket).

Just down from the Beatles booth is the table from the movie Heat.  Yes, We have walked where Val Kilmer has walked. 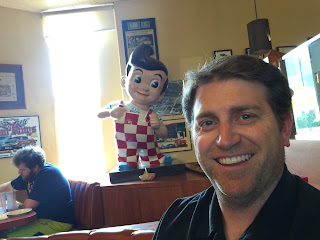 Even if the films weren't filmed in this exact Bobs Big Boy, you would need to live in a bunker to not be even vaguely familiar with the big boy himself.  He is an icon.  A happy little boy who loves himself a burger.  Kinda like our very own Brandan. 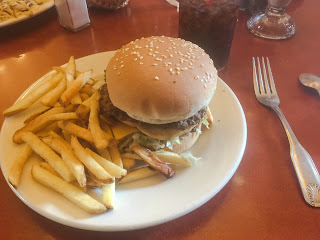 The menu was big enough to satisfy most anybody.  Jeremy had chicken and waffles.  I think it had a whole half chicken on the plate. Faith had a two egg breakfast with bacon and toast.  Brandan and I each had an "Original Big Boy Combo".  Bob's Big Boy is home to the original double decker burger. When you're  at a restaurant for the history it only seemed right to eat the historical burger.  It's not just an extra patty.  Its got an extra bun smacked in the middle with extra gooey sauce.  All but the two egg meal came with a salad for starters.  I love a great ranch dressing and this was one of the best I have ever had. 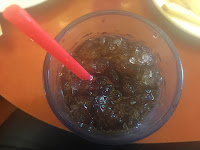 As a true soda lover I also need to point out that they use pebble ice.  The best of sodas all use pebble ice.  Take note if you are ever going to create the perfect soda, pebble ice.  Brandan treated himself to a milk shake and they did that one right as well.  Lets be honest.  It might not be the easiest place to go on if you are on any sort of diet.  The onion rings looked awesome though we didn't get any.


If you haven't figured it out yet, we love cars.  Brandan and I used to go find car shows in our high school years and dream about all the cars we would one day own.  Really I thought I would have an airplane hanger full of classic cars by this point in life.  Fast fact, we don't have an airplane hanger let alone the classic cars we would love it fill it with.  Life is funny that way huh?

Every Friday night Bob's Big Boy has a cruise night.  This show is frequented buy a car lover extraordinaire Jay Leno.  We showed up on a Saturday and missed the car show but I have no idea how they would fit it all in their parking lot.  It was packed without an event going on.  There was a slight wait to park the car at all.  They did have a car hop section but we knew we wanted to go in so we didn't check that part out.

All in all the place was fun.  It filled our stomachs and chased away some hangry that we were fighting.  We will go back at least once while we are on this California adventure.  It will probably be on a Friday and if I can twist his arm it will be without the kids. We will share a milkshake with two straws and he will ask me to be his gal.  It will be magical.

And here is our video quick trip of our Bob's Big Boy in Burbank adventure.