On Tuesday we talked about our recent visit to Yellowstone National Park, a trip we like to take over the Fourth of July holiday. I could go on and on about what I like about being in this part of the world but for anyone that's been there knows, it would be very difficult to fit all there is to love about Yellowstone in just two posts. So we'll veer off just a little bit.
Sometimes you need to explore more than just the scenic things inside the park. The town of West Yellowstone, Montana is a fun little place that I recommend you spend a little time in. Yes, it's just another tourist trap with little shops selling everything from t-shirts and camping supplies to cowboy hats, belt buckles and burritos from a bus (true story.) I challenge you to find another town that you can buy rocks, geodes and vinyl records in the same store (also very true.) She's not a big town so go ahead and set aside a couple of hours to browse.
If you like history and museums then you're in luck here also. West Yellowstone has a self guided walking tour that takes you through town and tells the stories of some of the buildings and important sites in town. It was a little late in the day for us to do the entire  loop during this trip but I'm definitely going to put that on my list of things to do. I just like that kind of stuff. Also there is the Yellowstone Historic Center that tells of the history of the area which involve trappers, stage coaches, and harsh winter living. You can check it out at http://www.yellowstonehistoriccenter.org/. 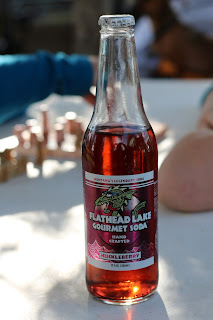 I had no idea that when I crossed the threshold of the Grizzly RV Park that I would single handedly change the course of our diets. After we checked in I happened by a small soda cooler. Inside this cooler I saw a bottle of huckleberry soda with a strange lake monster staring at me. Now anyone who spends time in these mountain towns knows about huckleberry, it's everywhere. You'll find huckleberry candy, jelly, soda, ice creams and even pancake syrup. Well I had never let myself get sucked in to the huckleberry craze...until now. I mentioned in passing that maybe I would like to try this soda but afterward I walked away, once more successful at avoiding the temptation of the huckleberry. Well someone bought said soda pop and a few of us tried it. Withing two days we had bought out all the RV park had, half of what the general store in Mammoth Hot Springs had and even compared it with other brands sold throughout West Yellowstone. It was an obsession with us all. I'm not big on soda so I'm pretty sure that I've already drank my years allotment of soda for the year. Of course this is just part of the weird fun our group finds when we travel. It makes for good stories. But if you go, don't let yourself get sucked in. Just kidding go for it. Go all in.
One more little secret I'd like to let you in on. There are other sites to see in this area besides Yellowstone that are just as scenic and some of them are a little dirty. Okay, mind out of the gutter people. I just meant that there are a plethora of dirt trails tailor made for your ATV, UTV and four wheel drive vehicles. We kept it simple on this trip and crossed the border into Idaho to visit Mesa Falls.
The falls are at the southern end of Island Park and up the Mesa Falls Scenic Byway. It's only a few miles up the road which makes it worth cruising over to.
If you're a fly fisherman than you'll want  to grab your rod and jump in at Henry's Fork and boaters will want to head over to Henry's Lake. If you want to see the creepy remnants of an earthquake from the fifties then you should look into Quake Lake. The lifeless trees stretching above the still waters really is eerie when you know the story of how a earthquake measuring 7.5 on the Richter scale shook the area with enough force to cause a massive landslide. The force caused by the slide created a wind strong enough to blow trees, rocks and unfortunately people a mile or more down the canyon. 28 people, campers on vacation, lost their lives that August day in 1959. Some bodies were never recovered and are presumed to still be buried in the rubble. There is a memorial and a visitor center at the slide site that tells the story of  the people that lived through it. It's amazing to see how much the scars left behind from the earthquake are still visible to this day.
The Yellowstone area is one of my favorite places anywhere. I love to be there and I hate to leave it even when the crowds are too big for my taste. There is a lot to see in a large area, some of which I haven't shared with you yet. I guess you'll just have to go see it for yourself and maybe, if the stars align, we'll see each other. Have a great weekend guys.