Packing For The Road 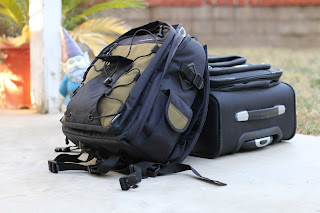 Since the launch of this blog we have had quite a few adventures to write about. Each one has had it's own unique itinerary and sites to see. However they have been pretty straight forward as to what we've packed. We've taken day trips with a cooler of drinks and a full tank of gas. We've packed the motorhome with food and clothes and headed for Moab and Yellowstone and we packed up the suitcases and stayed in a hotel outside of Disneyland in Anaheim. Again, all of this is pretty easy to plan for but there is still one more big trip that I've mentioned here that we are currently getting ready to venture on and that trip is what we've referred to as the Rubisemite trip. Yeah I can hear you saying, "Rubisemte? What the heck is that?" It's the combination of Rubicon and Yosemite. Confusing? Not after I explain it.
Being involved in the off road community we've heard of the legendary (there words, not mine) Rubicon trail. It's well regarded and important not only to people that have Jeeps but historically as well. I don't want to get too in depth because I'll be covering this in future posts but I bring it up because the trail requires multiple days to traverse it which means we're going camping.
Yosemite National Park is one of the most popular NP's in he United States and no one in our group has ever been there. So, it only made sense for a group of Utahn's to pack up the Jeeps and head out to California but we wanted to make this more than just driving twelve hours to do a rocky, dirt road. No. That would be too easy (we'll see.) We decided to mix sightseeing with our off roading which leads us to figure out how to pack for such a trip so I figured I'd talk it over on the blog.
So how do you pack for a vacation? I think each trip is different and depending on how many people you are traveling with will dictate what you take with you. For instance, if you have a family of four and you plan on taking a week long vacation you're going to have a few suitcases with you. If that family wants to take a day to go snorkeling are you going to pack your own snorkel gear? Probably not if you're jumping on a plane to get to your destination but if you're driving and have some extra space you might (I would because the thought of renting a snorkel makes me gag.) But if this family is planning on spending multiple days at the beach maybe they do stuff their own gear in a suitcase before boarding the plane. They just have to figure out if it's worth the weight and the sacrifice of bag space.
On a trip like Rubisemite we plan to do a pretty equal share of cooking and dining out for eight days. Obviously when we're out on the trail we'll be preparing all three meals a day which I think is great. I really hate spending hard earned money on eating out. It's easy while on vacation and it does afford a break for those that cook for their families but it's expensive while on a trip that's already costing a thousand or so dollars. But I at the same time I like to take in the local dining locations that are unique to a location. 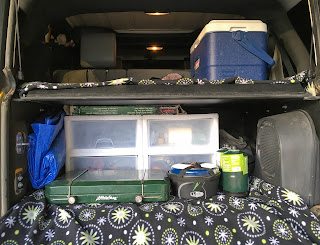 We'll shop for the first half of the trip locally to allow us to have enough room in the coolers this will get us through the camping part of the trip and back to civilization. The second half of the trip we're trying something a little different for our group. We rented a cabin near Yosemite that will fit all ten of us. There we'll have the freedom to cook if we want or eat out. So before we leave South Lake Tahoe we'll hit a store there and finish shopping for the rest of the trip. Yes it may be more expensive and a slight inconvenience but there really isn't a lot of room in the back of a Jeep and when you've got tents and sleeping bags packed for everyone space is at a premium. This is our way of easing the pressure.
Of course along with our day to day gear (clothes, sleeping gear, food) I also have all of our camera gear to bring along which really robs space. I'm lucky on this trip because not all of us have four people in their rigs. This allows us to share some space so that we can bring everything we need. I would almost leave my clothes home if it meant getting our camera gear in the Jeep. I just have to have it. How else would I be able to bring you guys content? I'm planning on putting out some good videos from this trip to share on YouTube so stay tuned for that. I will change my clothes though, in case you were concerned.
Well I've got some packing to do so I'll stop rambling. I do want to thank my wife for picking up the slack for the last few posts while I've been busy with work. She does well for me. While I'm at it I'll thank all of you who keep coming back and reading our disconnected thoughts each week and I'll invite you to our YouTube channel where we have slowly started to roll out some quick videos while we work on our longer works. Stay safe out there and I'll see you on Friday with a slight change in format. Stay tuned.