In our early years of life we all liked to play in the dirt. We kicked it, threw it and probably ate it by the handful at least once in our life. I for one have never grown tired of playing in the dirt. I was fortunate enough to come from a family that had a history of camping, exploring and playing with off road vehicles of all kinds. Heck I was put on my first Honda 70 three-wheeler when I was three years old and our obsession has only grown over the years.
You see, if you've never had the opportunity to explore the back country on the back of an ATV or in the comfort of your dad's old Jeep then you wouldn't realize that you've missed out on some great family time. My love affair with Jeeps spans back to 1989 when we attended our first Easter Jeep Safari in Moab, Utah. My grandparents purchased a three bedroom rambler in Moab and a short time later we had an Autumn Gold CJ-5 appear in his driveway (that's how I remember it anyway.) We explored every dirt road that was on a map and even a few that weren't and as our curiosity grew so did our group.
The CJ-5 was great but it only held the four of us and we needed room for six so a CJ-7 was added to what looking back now I would describe as a fleet of Jeeps. We also had other friends buying Jeeps and joining us on our travels and we expanded our borders of exploration throughout the entire state of Utah. We spent a lot of time out in those deserts and I was driving the most difficult trails Moab had to offer before I even had a license and I'm pretty sure that teaching me to drive was partly responsible for the thinning of Grandpa's grey hair. He never complained though and was always willing to take me out for a lesson. 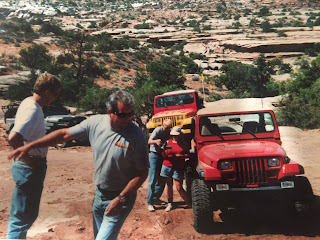 By the time I got married I had a Jeep of my own, my wife's aunt and uncle had purchased one and so did her mom and dad. I guess they figured if they wanted to see their kid they would need to buy a Jeep and I'm pretty sure they haven't regretted it. The funny part is that the same "Jeep disease" has infected my brother's in-laws as well over the last couple of years which has led them to purchase three of them. I don't think my dad and grandpa would ever have guessed the impact the purchase of that little CJ-5 would have on so many people over the years. The hardest part is getting everyone together at the same time. In fact I don't think that we have managed to have everyone in our group together in one place at one time. There are just too many of us with different schedules to make that work. But I'll take who I can, when I can I guess.
Our Jeeps have taken us to some of the best scenery Utah has to offer. Our ATV trips to the sand dunes have led to some great fun and even greater camp fire experiences. We've experienced weather from mild to wild and on rare occasions we've even dealt with an injury or two along the way. Of course the best part of it all is that we got to experience these things together as a "family." Why the quotes around family? Because many of the people I'm referring to are friends that I've known for so long and have become to close to that they are family, kinda like a Fast and Furious type of thing. So I guess the point of this post is one to say thanks to my friends and family and to show those of you out there that haven't experienced something similar this that you're missing out. Off roaders are one of the most welcoming people I have ever met and thanks to the Jeep Safari I've met a lot of people from all over the world. We all love what we do and we all want to share in it and spread it to all that seek it. Trust me, if you run into a Jeep guy at the gas station and ask him where he's going he's more than likely willing to let you tag along. 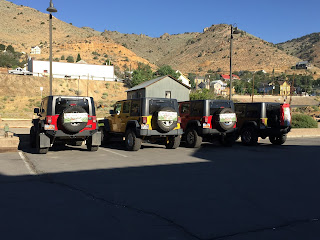 So I encourage you to grab your family this weekend and go do something fun together. It doesn't have to involve a Jeep or a desert, just get out of the house without the electronics and do something together. And as always, don't forget to grab a camera. Stay safe and we'll see you next week.