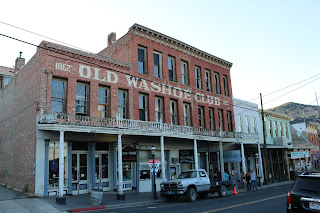 We're returning to Virginia City, Nevada one more time to finish out the month of October with one more haunted location and it's a fun one, to us at least. The Old Washoe Club's history is rich, literally and figuratively. During the peak of mining in Virginia City this is the place you found the highest of the high rollers. Here you can see where Mark Twain, Ulysses S Grant, General Robert Sherman, Artemus Ward, and Darius Ogden Mills would play poker in a back room. You will also see the actual table they sat at (according to the Washoe anyway.)
This building is the site of more than one murder and as is the case in many haunted locations, a suicide took place here. These incidents have led to what the owners claim to be an extremely active paranormal hot spot. The interesting thing about the Washoe is that they have embraced the checkered past and the activity and turned it into a profit. The Old Washoe Club has become a household name after being featured on Travel Channel's "Ghost Adventures" and Syfy's "Ghost Hunters." Today you too can be like the guys on these television shows and you can investigate the building for yourself, for a fee of course. If a full blown investigation isn't for you then you can opt for a guided tour of the building where you'll learn of the building's history of powerful men and it's violent past. We chose to take the tour during our visit in August and we weren't disappointed. 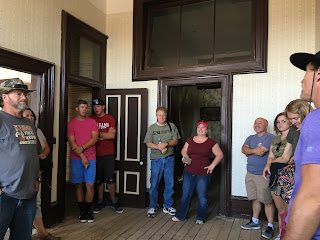 Fee paid and an EMF (electromagnetic field) detector in my son's hands we set off on our 45 minute tour of the Washoe. As we were entering the first room on the tour (pictured) our guide was waiting for everyone in the room to gather and while we were waiting he and I both heard footsteps walking above us. He turned and asked, "Did you just hear that?" in which I smiled and told him that I did. He mentioned that we were the only people that were in the building and I admit that there is only one way out in the current set up of the building and we never ran into anyone else so I believed him.
I enjoyed the tour because you were being given a history lesson about the building and the town while at the same time listening to the creepy and disturbing stories of the past. The guide also had a really good EVP (electronic voice phenomenon) recording that he played for us which to hear one first hand that wasn't actually on the television is extra creepy. The EMF meter that Jeremy carried did go off quite a few times during our tour that kept things interesting, however, with everyone with a camera or a phone in their hand seemed to cause it some issues so in my opinion it was more fun for the kid's to play with as opposed to being accurate. 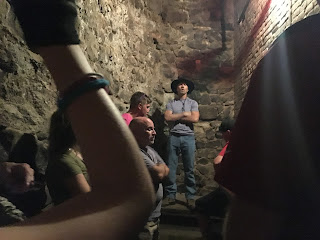 The tour ends when they take you down inside what they called the "body chute." This small, cool, and musty room was used during the winter to hold corpses of locals that were unfortunate enough to pass away when the ground was frozen solid. The bodies would pile up in the room until the spring thaw when they could be laid to rest properly. I'm not sure but I suppose a few people might find that to be a good enough excuse to hang around and rattle some chains late at night. Overall I found this to be the highlight to our Virginia City visit and to be honest it wouldn't be hard to convince me to do it again. Just hearing a few footsteps cross the wooden floorboards above was enough to wet my appetite for more ghostly investigations. If your even remotely interested in history or the paranormal then make sure you take the time to visit the Old Washoe Club if you find yourself in Virginia City. Also for your information, the Washoe isn't the only haunted building that you can tour in town. We also toured the Mackay Mansion that also boasts paranormal activity but that's another story.


Also it wouldn't be right of me not to mention that we have had to say goodbye to our beloved pal Jeep, also referred to on this blog as Jeep the Adventure Dog. He had been suffering from degenerative disc disease which is common in Dachshunds. He had been in pain on and off for the last eight months and we did all that we could to keep him happy and healthy until yesterday when his body just couldn't keep up with his free spirit. We "accidentally" picked him up at a pet store while we were trying to replace a dead crab. They didn't have a crab so we ended up with a dog. I'm not going to get into that though. He was a good friend to us all but especially our son Jeremy. He will be missed dearly but we are comforted knowing that he can run and play again free of pain.