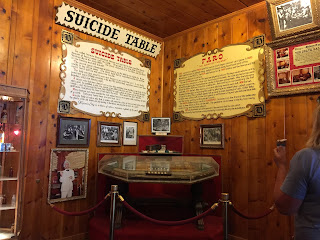 It's not uncommon to come across places or items that have strange stories attached to them. Some stories are of course a little far fetched while others have histories too strange to forget such as the case with the "Suicide Table" in Virginia City, Nevada.
Located in a lonely corner of the Delta Saloon sits an old Faro table. Glass covers what's left of the faded and torn felt and velvet ropes keep a safe perimeter from what some people believe to be a cursed relic from the 1860's. Had only one person committed suicide at this table it probably wouldn't be famous but that isn't the case. No, three of the tables owners have ended it all which makes us wonder what it is about the table that causes such extreme action.
The first owner, "Blake Jake" had been having a run of terrible luck and ended up being $70,000 in the hole. Desperate for a solution he decided that it would be best to just shoot himself in the head. 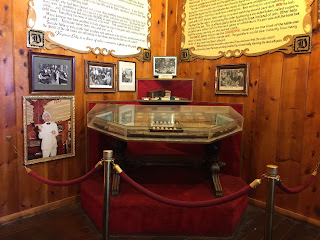 The next owner would be lost to history not only by death but by name. No one recalls the name of this man but his story, like the man before him, had a very bad night and was "unable to payoff his losses." This story is a little more mysterious because there is no official record that clears up whether he actually committed suicide or if he was, er, assisted, if you know what I mean.
After the second death attributed to the table occurred the table was placed in storage because no one would deal on it. Of course as any good cursed object goes, it would come back into Virginia City history only this time disguised as a "21" table. The shiny new look helped people forget it's dark history and play resumed. It was only a matter of time, however, that the table would take another life. One very drunk and very lucky miner sat at the table and could do no wrong. He played all night and in the end won $86,000, horses, and an interest in a gold mine. Not a bad haul. All of these items were the possessions of the table owner who by the end of the night was left with nothing and once more a man found himself staring at fate through the barrel of a revolver. 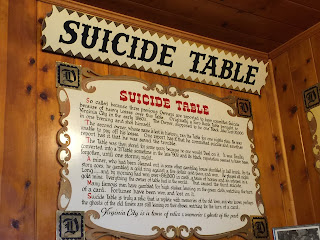 The Suicide Table's dark history is a window into the past of Virginia City. A time where times were tough and people were tougher. A time when money, booze and women ruled the community. As we know now this combination rarely makes people rich or happy and eventually all three dried up until all that's was left is a tiny tourist trap where people flock every year to peer through that window and wonder what it would have been like "back in the day." Lucky for us, we can roll into town with little worry about our fortunes while we spend time here, at least as long as you stay away from the Faro tables.