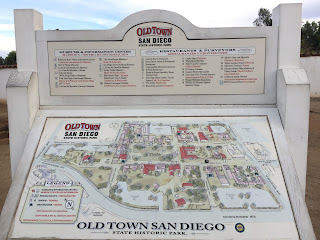 Tourist destinations wouldn't be popular if the sites didn't have something interesting to offer. Each place has it's own flair and "must see" sites or things to do. Most people wouldn't go to New York City without seeing the Empire State Building and what would the point be to visit Washington D.C. without getting a glimpse of the White House? Well, San Diego, California is no exception. You might visit Balboa Park to take in a museum or the zoo or you may want to take in a little military history while touring the U.S.S. Midway. But I don't think I would be alone in saying that one of San Diego's must see spots is Old Town San Diego.
We tried to visit Old Town on our previous trip to San Diego back in January of 2016 but we spent too much time elsewhere to make it over there. Since we're only a few hours away we decided to pack up and spend the weekend and like I had hoped, we weren't disappointed. 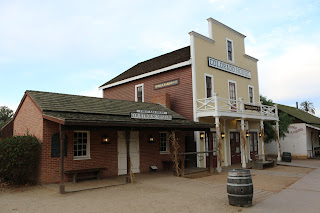 We kept it easy and stayed in a hotel just down the street to keep our driving to practically nothing and we never had to fight for a parking spot. Once hitting the street it didn't take long before the wonderful aromas of Mexican food surrounded us. In other words, there's a lot of Mexican Restaurants in Old Town which isn't really a bad thing unless you want variety. In fact it may be a sin not to stop in to Cafe Coyote. Their salsa and chile verde are by far the best I've come across. Really. If I could replicate it I may not eat anything else. I guess I could have been really hungry or something but that's my story and I'm stickin' with it.
Now to be up front and honest, Old Town is a tourist trap much like Calico, CA or Gardner Village in Utah. You'll find a lot of little shops housed inside very old buildings selling candy, sodas (which we bought,) olive oil (also bought,) and jewelry (not this time.) I suppose that's what keeps the place going but for me the draw is the history and the buildings. One building in particular peaks my interest each time I visit and that's the Whaley House but that's a story for another time. The buildings within the borders of the state park consist of a mix of original and reconstructed buildings mostly stemming from the mid 1800's. The Well's Fargo museum resides inside the Colorado House, a former hotel that has old stage coaches and telegraph history to explore. The Seeley Stable Museum has historic furniture, wagons and live burros if you're into that sort of thing. Be careful though, they bite.  We did hear a rumor that they were going away soon. 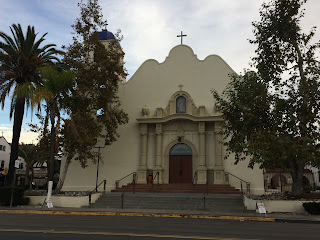 The first building we entered was a church now used by the Church of Immaculate Conception.  This beautiful building is worth stopping by just to look at the stained glass windows. The detail is incredible to me and since I don't spend a lot of time around stained glass it's cool to check them out. This was also the first time that I've seen prayer candles have now become digital. I guess nothing is sacred anymore.
We spent an entire day in Old Town and it wasn't until I started writing this post that I realized how much of the place we had neglected to see. I didn't make it into the Sheriff's Museum to look at old uniforms and patrol cars. We didn't take the extra walk to the Mormon Battalion Historic Site either. Now I feel that I have once again left San Diego with unfinished business. I guess we'll have to go back soon to finish exploring the town and, of course, partake of some more chile verde.
Take the time to check out Old Town when you visit San Diego. It really is worth the time. It wouldn't consistantly be one of the most visited California State Parks if it wasn't. By the way, even though it's a state park there is no fee to get in to the town or any of the buildings. That means you'll have more money to buy hot sauce or olive oil or both. Have a great weekend everyone. Stay safe!