Its always another day in paradise.  Realizing that it is another day in paradise is the trick.  Disneyland is a magical place I absolutely love if I wasn't to obvious about that, but even Disney days aren't perfect.  Sometimes its 95 degrees in hot and humid Southern California and that 70 minute wait to ride Radiator Springs Racers just might break you.  Sometimes there are a million people squished into the space you're standing and you are wondering how many more they can fit until the park hits capacity.  Sometimes you go to a theme park seven times in a ten day period and your feet are screaming at you to sit a minute.  We decided to explore our magical place as if there wasn't a ride to be had and we were not disappointed. 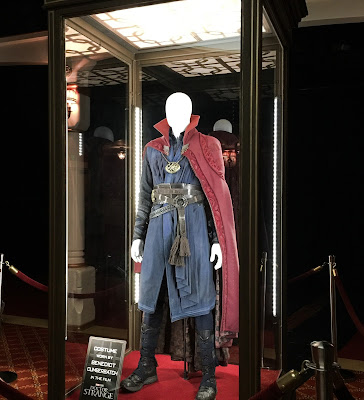 Ever since Disney took over Marvel I have been so excited to see what they might do to the parks.  If I can be completely honest, the Twilight zone Tower of Terror being turned to the Guardians of the Galaxy was not my idea of a great first step.  I get that there are things decided in meetings that we don't know the details too.  I also get that we are talking about Disney and that I'm sure they will do a great job.  They are killing one of my favorite steps into an imaginary place and replacing it with something I am not as excited for.  I've heard rumors that they might be transforming most of the corner around the ride into a Marvel themed area but nothing solid enough to get excited about.  It has been super cool to see the Iron Man suit over in Innoventions.  It was also really cool to see the suit Benedict Cumberbatch wore in Doctor Strange.

Next to the Monsters Inc. ride is a sneak peak of Doctor Strange in the theater where they used to have the Muppet's show.  As you walk in to the wait area this suit is on display.  Our little gal thought this was the coolest thing ever.  We loved the Sherlock series so she was a big fan of Benedict Cumberbatch.  To see the suit he actually wore was such a treat for this little fan.  Of course its all in 3D so they hand you a set of glasses to be fully immersed in their story.  It startled me a little bit when the walls moved as part of the story.  Attention to detail is their thing but having screens down the sides of the theaters as well was an extra special touch.  I realize that the movie is out in the theaters already but we haven't yet watched it so this was all a surprise for us.  It was also air conditioned in the theater which was awesome. 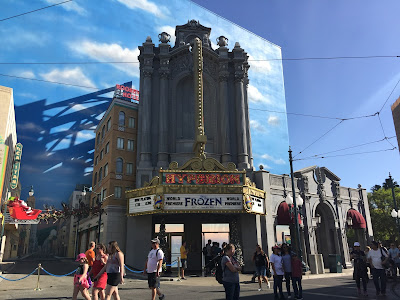 If you are a frozen fan, or a stage show fan, or a human being then I have heard that the Frozen stage show at the Hyperion Theater is the must see show of a lifetime.  I cant tell you how great it is though because I cant seem to get in line early enough.  They first time we tried it was cutting it to close to catching a plane.  The second time we tried the 45 minutes early we got in line was not enough.  It seems that if you really want to see the show you should line up around and hour early and still you might not make it in depending on crowds.  We have our plans in place to make a trip to the park just for this show so I will return and report later. 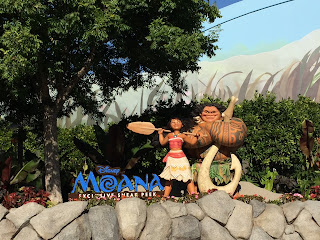 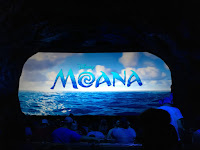 Where It's Tough to be a Bug played there is a sneak peek to Moana.  While I am excited to see this movie and I was in awe of the sneak peek, It's Tough to be a Bug is coming back right?!?! I hope so.  The preview was awesome with full effects.  You are immersed into the story complete with 3D glasses, splashes of ocean waves, little critters running under your bum, bursts of fog and a tale of bravery and magic.  I'm seriously excited to see this movie now.


Great Moments with Mr Lincoln is another show that cant be missed.  Walt saw the power in the story of this man and his love for his country.  Its chilling to see Mr Lincoln stand before you in this amazing show.  Seriously, Go see this!  And while you are there take time to look around the wait area to see how Disneyland took shape.  We tend to walk past this as we rush down Main Street to the fun but its so so good.  Also on Main Street is the Main Street Cinema.  Here you can see six of Disney's early films in a small dark open floored theater.  Its closely across the street from Gibson Girl Ice Cream Parlor.  I'm not trying to tell you how to live your life but it seems to me that the location of these two places is meant to be a treat and seat, well a seat on the floor but still.  Disneyland has a lot of things to see and do that aren't all about the rides.  The rides are awesome though so don't skip any of those.  Just don't pick the Mad Hatters Tea Cups too soon after your ice cream.

The greatest adventure is what lies ahead.  J. R. R. Tolkien