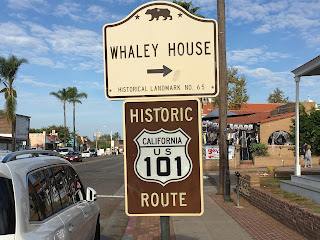 I'm taking us back to San Diego once more to discuss one of the more special buildings of Old Town, San Diego. Many buildings come and go, their histories lost to time but in some cases a building's history is so special that it becomes a beloved landmark. These buildings are the one's that land on historic registries which help protect them for multiple generations to enjoy. The Whaley House is one of those buildings.
What started out as a granary became Thomas Whaley's dream home. He designed the two story home himself and construction was completed in 1857. At one time the granary was used as a courtroom for San Diego County and the upper floor's front bedroom was converted into a small theater with a stage and seating for 150 people. After being in this room on a few occasions I'm here to tell you that I sure as heck wouldn't be one of those 150. There simply isn't enough space to squeeze that many people in there. I suppose fire code was a little different (non existent) back then. 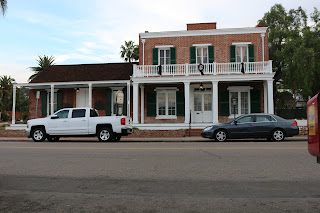 As you can see the Whaley House was never just a family dwelling. From courthouse, general store and a theater the house was reinvented to serve the community as needed and based on that history alone I would say it built a storied reputation. But the house is known for one other, maybe controversial, detail. It's haunted.
Yeah, I know Halloween is over but you can't talk about the Whaley House without talking about ghosts and two of my top 10 favorite topics of conversation are hauntings and history.   To be honest I would have included the Whaley House in our October posts except that we chose to visit the last weekend of the month and time just ran out. What do you do?
Many paranormal teams have visited the Whaley House with many of them coming away with very interesting photos and audio recordings. The home has been featured on multiple television shows, one of them even rated the Whaley House as America's most haunted house. This was my third visit to the house and each time I did a different type of tour none of which gave me any type of evidence of ghostly activity. But don't think I'm implying that this place isn't haunted. I just haven't been lucky enough to catch anything yet. My eleven year old daughter and my Dad both saw a strange shadow hovering over the stage while we listened to our tour guide tell the history of the 150 people cramming into the room. I'm bummed I didn't see it but if both of them saw it then something was there. I guess I'll just have to keep going back. 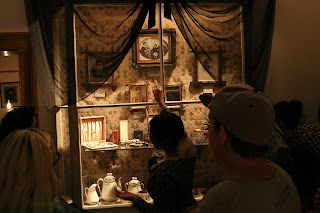 Who's still home? Thomas and Anna Whaley have been seen in the house and the yard. In fact, one of best stories I've heard is when Anna Whaley appeared to Regis Philbin. Other unknown spirits seem to hang around the house. Whether they were former residents that had rented the home or family friends checking in on the place are questions that will never be answered.
The most famous ghost surrounding the property is that of "Yankee" Jim. Convicted of attempted grand larceny, James Robinson was hung on the property prior to the construction of the house. His execution was not a smooth one. In fact, it was difficult to watch according to the history books. Rather than a quick snap of the neck he ended up slowly strangling to death. Thomas Whaley happened to be a witness at the hanging and still decided to purchase the property and built the house directly over the site. It is believed that the large arch in the first floor living room is in the same location as Jim Robinson's gallows.
You have the option of taking a self guided tour during the day or a guided tour after 5 pm. We opted for a 7:30 pm tour which ended up being a popular time slot. Our large group fit just fine while we were in the court house portion of the house but be we all quickly became close friends as we toured the rest of the home. Let's face it, no house is ever really designed to become a museum but it surely wasn't a thought during the 1800's. While it was tight it was still a fun tour that made sure to hit the highlights of the families history as well as making sure to meld in the ghost stories which in my opinion keeps everyone paying attention and teaches them something as well. As an unexpected surprise the Ghostbusters and Ecto-1 were paying a visit on the night we were there which a thrill for my kid's. Being the car guy that I am I was more interested in the car which was a very well done recreation. I obviously wasn't the only one who like the car because the crowds around it kept me from getting a clear photo of it. Oh, well. Kudos to them and the Whaley House for having them.
The Whaley House is one of those special places that I try to always visit when I'm in the San Diego area and it's a very popular attraction for tourists year round. It's possible to visit the house thanks to the Save Our Heritage Organization (SOHO.) They have been the caretakers of the Whaley House since the year 2000 and have spent these years painstakingly restoring the home by using old photos and records. To see more on their story check out their web site  http://whaleyhouse.org/aboutus.htm.
Of course studying the history is fun but not as much fun as visiting for yourself. I'm told the weather is always beautiful down in San Diego so if you're looking for a nice winter getaway you should head on down there and don't forget to pay attention to your peripheral vision. You never know who may be watching. By the way, if you're lucky enough you might get to meet the Ghostbusters. Just sayin. See you next week. 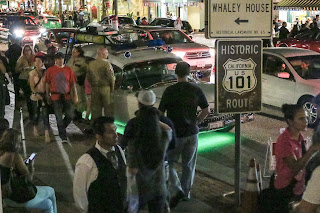