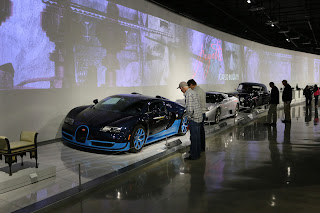 Just about everyone has there idea of what art should be. For some art is a painting of a simple woman that lacks a proper smile while for others a sculpture of a guy deep in thought. Perhaps photography is your art of choice. But what if you were to take everything appealing about those artistic variants and meld them together? What would you get? Well the fine arts crowd may not agree with me (and they probably wouldn't be reading this article anyway) but I would say the result would clearly be the automobile.
Yes the automobile. That thing you rely on everyday to get you to work, the grocery store and soccer practice. They come in all shapes and sizes with varying degrees of comfort  and styles. Some are low slung and quick and others are large, boxy and carry a large family. Despite their differences they all started with an idea that was put to paper as a sketch. From a sketch a clay mold is sculpted, shaved and molded into what will become an automakers next big thing. Some of these automobiles will fade into history with little thought from anyone. But some will live on forever, coveted by car enthusiasts for all time. So what happens to these special cars? Well a select few will make it into someone's collection and for an even smaller number they will make it into a museum and one of these museums can be found on the west side of Los Angeles, California and it's called the Petersen's Automotive Museum. 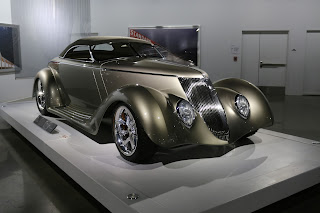 If the name Petersen sounds familiar it's probably because you've read one of their multiple magazines. "Hot Rod," "4 Wheel and Off Road" and "Bowhunting" magazines are just a few examples of what Petersen's has brought us which is interesting enough but at the auto museum you get to see these feature worthy cars in person. From the dawn of automobiles to the cream of the crop they're here under one roof. A few of our favorites were the 1915 Ford Model T, a 1956 Chevrolet Bel Air, and my daughter's favorite the 2015 MClaren P1. Yeah she's got expensive taste. But there's so much more to see here. Custom built cars from Boyd Coddington and Chip Foose are on display and are true pieces of art.The detail and skill that went into building these cars is amazing.
If movie cars are your thing then you would be excited to see some true icons at the P.A.M. The Ford Thunderbird from Thelma and Louise is here as well as the Plymouth Fury known as "Christine" from the film of the same name. Thanks to Stephen King's novel and the film we'll never look at this car the same way again. The Delorean from Back To The Future is also there and just a few feet from it is the Batmobile from 1989's Batman film. For fans of these films it's fun to see them in person for sure. 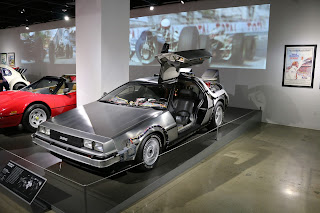 During our visit they had a large display of Bugatti display that opened my eyes to their history. I had only heard the Bugatti name a few years ago and had no idea where they had come from so I was truly surprised to see displays of not only cars but art work as well. Jewelry, furniture and even musical instruments from the Bugatti family are  carefully displayed among their cars. Of course the car everyone wants to see is the Chiron. With nearly 1500 horsepower and a 0 to 60 in 2.5 seconds the Chiron is definitely one of the most exciting cars on display at the Petersen's Automotive Museum.
As is the case in any museum there is something here for every taste. Classics and moderns, customs and electrics, primitive to technological marvels all in the same building. If you get bored in this museum then you just don't love cars. If you've never thought of the automobile as a work of art I hope a visit to Petersen's Automotive Museum changes your mind. I would set aside three hours to explore the building and a friendly heads up you won't be able to take any bags or backpacks through the museum so you'll have to leave them in the car or check them at the security desk. Don't forget your camera though you won't want to leave without pictures. To learn more check out their website  https://petersen.org/ . And to get a quick peak you can check out our Quick Trip video below.