The Ghost Town of Mentryville, California.

I remember how odd I thought it was that there was oil pumps all over in California.  They seem to sit in the middle of huge bustling cities. It will never not be odd to me that one sits right between the Beverly Center mall and Cedars-Sinai, the hospital of the stars.  Seriously, look it up on google maps.  The mall makes a turn around it like its not even there.  California has a rich history in oil and one of those oil pumps sits right up the hill from our little place in SoCal. 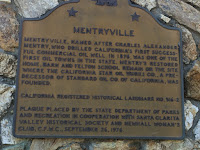 Mentryville sits at the end of a road named Pico Canyon and was home to the first commercially successful oil strike in California named Pick number 4. It was the longest running as well being capped off in 1990.  Where there is work there will be workers.  Where there are workers there will be a need for a town and so up sprang Mentryville.  Mentryville, named after an oil field superintendent Charles Alexander Mentry, was a boom-town from 1876 to 1900. 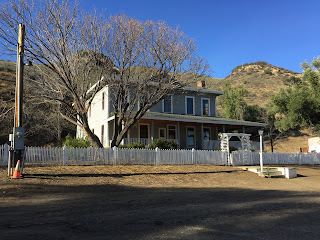 When the boom was finally over the town packed up and left like they seem to do leaving only a caretaker and a ghost town.  Still standing is a 13 room mansion that was build by Mentry.  The house was badly damaged on January 17th, 1994 Northridge Earthquake and is no longer safe to go into.  The conservatory is working to get funds to restore it so one day we can see the inside as well. 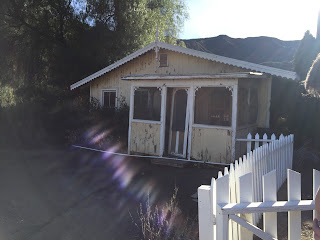 Near the mansion sits the movie house.  Although it looks like a house outside the inside is finished more like a garage for storage. While it fits right in with the rest of the area it was not a part of the original oil town. The small yellow house is really just a movie set built by Disney to film "One Magic Christmas" in 1984. The superintendents house was once used in Lassie, Return to Green acres and many western movies through the years. 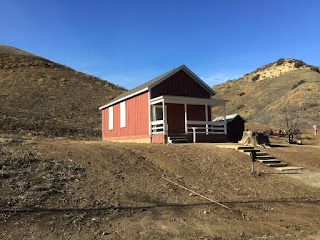 Down the path from the two houses sits a red and white one room school house.  The Felton School District was named for Charles N. Felton. Felton was president of the Pacific Coast Oil Company and later a US senator. This was the first school house in Santa Clarita that was not also used as a private home. Children in the first through eighth grades were taught here until the school closed down in 1932 when the child population dropped below the required 5 students. 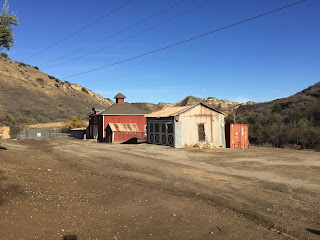 The ghosts of the past have left us with a few houses and some aged and weathered equipment to tell the story of how life once was.  On a warm January day in Santa Clarita, California my little family was able to take a fun walk up a paved street to a trip back in time.  We laughed and visited as we strolled along the path to the parking lot where for $5 you can drive right up to the gate.  Cell service is very hard to find here so if you are having trouble pulling your kids away from those little devices this is the place. 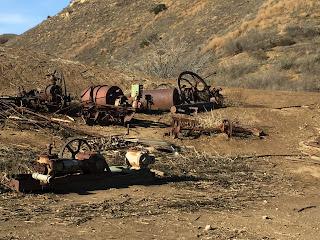 This week has been a wet one here and we lost a historic redwood tree in the storms.  Time, weather and even earthquakes can take these places from us.  Thank you to the people who worked so hard to keep places like these here for us to see.  Make the time to get out an see them.  Life leaves no guarantees that these little gems will be here tomorrow.  Life also ticks away at a neck breaking pace.  My baby turned 15 this month. At 15 he still thinks were cool enough to hang out with.  I guess I'm pretty lucky like that.  I have two great kids with a love for adventure.  I'm not sure how many years I have left to cram non stop adventure in before college, work or relationships slow them down, but Im going to take it for all its worth.  I wonder how far of a drive Gettysburg is from here? 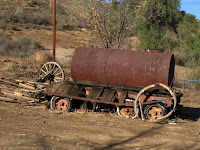