A Walk Through Universal Studios Hollywood.

When I think of amusement parks in Southern California I immediately think of Disneyland. Lets be completely honest.  I love all forms of Disney magic.  Lately we have been spending a lot of our time at another SoCal amusement park.  Universal Studios Hollywood is an awesome place we love to visit.

I know we have talked a little bit about Universal Studios before but I'm not sure I ever explained why it's such a love of ours.  We love history in all of its many forms and Universal Studios is dedicated to the history of the movies it has helped create.  It also never has the crowds that the "House of the Mouse" has.  Hit Harry Potter themed areas first and your day will be smooth sailing.  While the lines can get longer here, the Forbidden Journey is worth the wait.  One day I hope to be writing all about Universal Studios in Orlando.  Their Harry Potter themed adventures are larger and have more to offer. 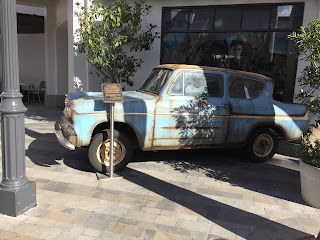 Part of the draw is to see props from the movies.  Faith especially loves the movie cars.  Here is one that you might recognize from a favorite magical film.  Ron steals his dads flying car in the rough start to their second year at Hogwarts and lands it here for us to see.  You can also see the flying motorbike that Hagrid travels on while in the line for the Flight of the Hippogriff.  On the Back Lot Tour you can see the Gyrosphere from Jurassic World, the futuristic Ford Probe and the Ford Edsel from Back to the Future II, the mobile lab that fell off the cliff (filmed in Universals Parking lot) from Jurassic Park II: the Lost World, the foot powered car from the Flintstones movie, a tank and a Jeep from Transformers, and a handful of other motorized movie stars. 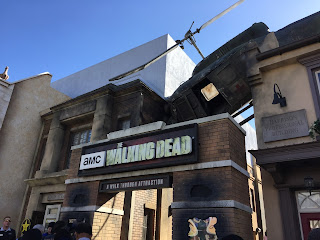 If the adult in you is looking to get scared then this is the attraction for you.  Walk through the world of The Walking Dead.  Hollywood has amazing makeup talent used to make the movies come alive.  This talent is used here to make the zombies so real you wont believe it's not happening.  Lucky for us it wasn't super long and we were tough so we survived.  They promise not to touch you so you can close your eyes and think happy thoughts if you need to.  Just enter under the destroyed helicopter and follow the guides in the bloodied vests.  What ever you do, don't get bitten. 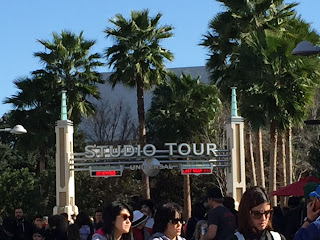 For me the best part of our day is the Studio Tour in Universals Back Lot. You load on the tram and they take you to places you have seen in the movies.  The clock tower is still there from the Back to the Future movies though they have changed it up a bit.  They will take you through New York on a street designed to trick you into thinking you are there.  It turns out its not easy to shut down the actual New York City so a lot of the scenes you think are in the Big Apple are actually filmed here.  Six Points Texas is where a lot of the older westerns happened.  Think about it, you can ride over the very spot the John Wayne strolled.  Bruce the shark, named after Steven Spielberg's  attorney,  comes to visit you in Amity Island. You can survive an Earthquake (Experience it here on our YouTube channel), drive through Wisteria Lane, be saved by King Kong and run from Shaw with the crew of Fast and Furious.  Definitely don't miss the Studio Tour. 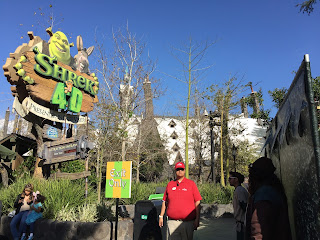 From Shrek 4D you can see the towering peaks of Hogsmeade but don't let that make you skip it.  The story continues and you can be a part of it in a theater fully immersed in the tale. The waiting area to get in is just as fun so take the time to look around.  Your kids and the kid in you will love it.  You can also meet up with some fun characters like the cast of Shrek, SpongeBob Square Pants, Minions, Scooby Doo, the Transformers and Raptors if you dare.  Marilyn Monroe and Lucille Ball walk the streets here with Dracula, Beetleguise and Frankenstein.  If its a hot day you can cool off in the splash pad areas of the park or in the attached City Walk. 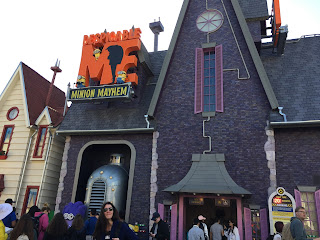 You can become a minion working for Gru in Minion Mayhem or the young ones can play in the Super Silly Fun Land.  Bring them a change of clothes because the fun land is a wet kind of fun. You can ring the doorbells of the homes down the street where you will hear the sounds of minions (Experience it here) and eat banana themed snacks and Machos Nachos at Gru's Lab Cafe.  My kids love love love the Animal Actors show but my favorite show is the Special Effects show.  The Water World show is really cool but its behind a fence.  I'm not sure if they are fixing it up or if it is going away to make room for a new attraction. 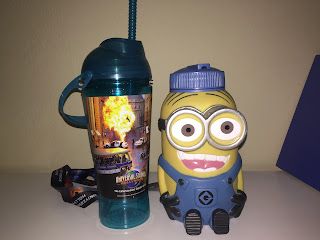 From eating a giant doughnut at Lard Lad's to experiencing a Butterbeer at the Three Broomsticks, you can taste your way through the shows as well.  Stop by Jurassic Cafe or Krusty Burger if you want a simple burger.  The Three Broomsticks has traditional English foods.  You can get a snack at Starbucks, Cinnabon, Ben and Jerry's, Panda Express or a variety of snack shacks through out the park.  The turkey legs are huge and the smell sneaks up on your from time time. You can eat as simple or as fancy as you want here.  And if you cant find anything in the park you can visit the City Walk to pick from all they have to offer. That is where you will find It's Sugar (Experience it Here) if you are looking to get a major sugar fix. You can also get Subway, a hot dog from Pinks or sit down in one of their restaurant choices.

Just a tip, when you get there you can buy a souvenir cup that gives you refills for $.99 for the day.  After three refills it has saved you money if you choose the cheaper of the options. This Minion sipper is adorable but pass it up for the simple blue one.  The sipper was a struggle to drink from reminiscent of a sippy cup of a toddler but it wasn't as light and easy to get around. We purchased a strap to help tote it about for an extra $2.99 and it bounced off our belly with every step.  I'm not sure drinks are meant to be wore around your neck.  At $16.99 it is a super cute desk decoration.  The simple blue cup is $8.99.  It has a handle you can use to attach to the strap of your bags and a great straw that makes drinking from it simple. 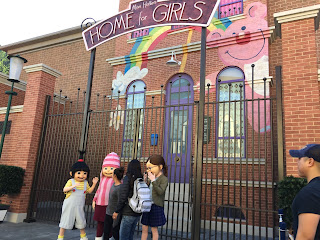 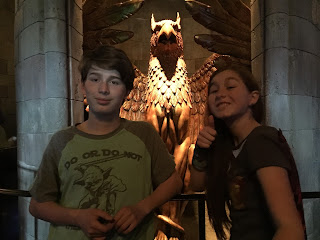 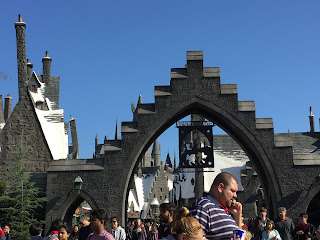 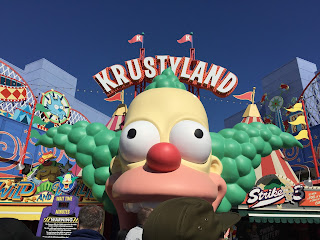 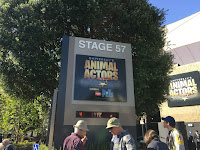 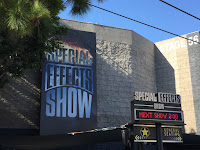