RV Life: Part One, The Search 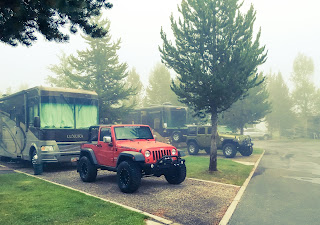 Raindrops pelt the thin roof above the bed creating a deafening roar that keeps sleep from taking hold. Outside the wet leaves of the surrounding trees shimmer in the darkness with each flash of lightning. The kids jump and laugh with each thunder clap but the dog is whining. As you lay there you wonder if you managed to put away all the chairs, lanterns and trash bags before you came in. The wind and rain came in fast forcing everyone to scramble for cover. You could either get up and check or you can cross your fingers and assess the damage in the morning. You know that things will be alright. This is nothing new. Storms come and go but when you're living in an RV nothing is typical and a slight part of you wonders what kind of troubles could come out of such a strong storm. These walls aren't as strong as a house and it doesn't take much for a little problem to become a big issue. Eventually exhaustion kicks in and you fall asleep.
In the morning when the shades are opened the birds are chirping and drinking from puddles left behind from the storm. The crisp, clean air is refreshing and you can't wait to get out and explore. The next week will be spent exploring Yellowstone National Park. After that the plan is to head south into Utah to visit Capitol Reef, Bryce Canyon, Zions, Arches and Canyonlands National Parks. The "Mighty Five" as they call them. While you're in the area you may want to see the Grand Canyon before getting into California. Or maybe you'll head east to Carlsbad Caverns in New Mexico. Eh, you'll decide when the times comes. You don't have to decide now because you're free to choose to leave whenever you want. You live in an RV. You are free. 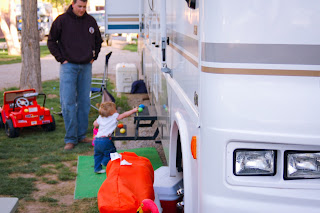 I've spent a lot of time in RV's through my life. As a kid we would head out to the sand dunes for a weekend of fun. We explored Split Mountain and Dinosaur National Monument. As I got older my Dad and our friends would load up the trailer with ATV's and hooked it up to our little motor home and headed for the desert to ride until the weekend was over. I bought our motor home in 2005, just a month before my daughter was born. She spent four of her first six weeks camping instead of lounging at home. Talk about hitting the ground running, right?
I was twenty six then and we still have that same little 23 foot motor home. Turns out that after twelve years and thousands of miles and countless days on the road we've come to the realization that we need to upgrade. There just isn't enough room for four grown people. We have very little storage and no slides. We have no couch which on the bright side forces us to spend more time outside...or in bed...if we can find it under the pile of supplies we have to move around constantly. Yeah it's time for a new one.
We went to an RV show a few months ago to try to get an idea of what type of RV we want to go with. It's a tough decision. With all of the different options and the costs included I think the only decision tougher is choosing an actual house. You want to make sure it's the right choice and that it fits into your budget. Quality also has to be something that you look at because if there is one constant with RV of all kinds is that things break. If you're not a tinkerer, don't buy an RV.
I think that we've decided that we will get a motor home again rather than a fifth wheel because of our lifestyle. As I mentioned earlier we like to take our ATV's and UTV's out and boon dock for the weekend and I'm not keen on dragging a trailer behind a trailer. That sounds like a bad idea despite the fact that I know people that do it and do it well. Not for me, though. That would also mean I would have to go buy a bigger pick up truck to pull it and I still have a brand new truck in Utah waiting for me to return. I'm not sure replacing it makes sense. 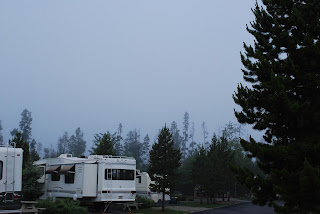 The motor home gives us the mobility and room to get where we want to go and still drag a trailer. The trailer can either haul the ATV's or the Jeep depending on where we are going and what we plan to do there. The Jeep is also capable of being ground towed allowing us to stay in a campground for a longer period of time and we can use the Jeep for exploration. Trust me you are not going to enjoy a National Park trip if you have to drive and park a 30+ foot motor home through it. Too many cars and no parking.
We're also thinking of doing something completely crazy that directly affects the style and quality of the RV we are going to purchase and I'll get deeper into that in part two of this story on Friday. Until then have a great week and remember it's never too early to start planning your next adventure. Spring is just around the corner.