A Visit To Queen Mary

It may be hard to believe for some kiddies out there but there was a time that airplanes were not the major form of transportation that it is today. If someone wanted to cross the country you either had to do it by horse, stagecoach, or by rails. If you needed to get overseas you would have to book a trip on a ship and cross your fingers. As time passed the ships grew and the materials got stronger and before long the ocean liner was born.
When you hear the words "ocean liner" the classic image of a black and white hull fill most people's minds. Most famous ships were met with tragedy such as Lusitania or Titanic but there were plenty of other ships with rich histories that have survived even to this day. Such as RMS Queen Mary.
The Queen Mary was in service from 1936 until 1967 and is now on the National Register of Historic Places. But why? What made this ship so special? We decided to visit the old girl and find out. 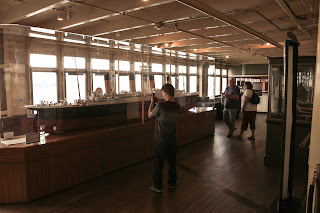 On the surface the Queen Mary looks like any other old ship. Small spots of rust dot her riveted steel plates here and there. The floor boards are uneven but maintained and there is some renovation occurring behind plastic covered scaffold. We took the self guided tour for this trip although you will typically have a choice of an audio tour or a guided tour. The audio tour was down due to the renovations but that's okay, we like to roam. We dropped into the engine room first to see what it took to move this 81 ton beast. While I like anything with a motor on it I would be lying if I told you how anything in that room works. There are steam pipes and chambers separated by narrow catwalks; long drive shafts lead to propellers and are attached to some of the largest gears that I've ever come across in my life. It is definitely not a one man job to keep a ship like this moving.
We then moved upstairs to the promenade deck which, compared to today's cruise ships, pales in comparison but at the time would have been top notch. Part of the ship is filled with large scale models of other ships that go into great detail to show how these ships are constructed. The Titanic model is cut in half to reveal the interior levels as they were constructed. You can actually see how the Grand Staircase led to the different floors and you can follow the corridors to individual state rooms throughout the ship. This was cool for my daughter because she, much like myself, has been fascinated with Titanic's story.
On deck, in the shadows of the large exhaust stacks we could look across the harbor to Long Beach. Shoreline Village and the Aquarium of the Pacific are easily visible from the Queen Mary and Carnival Cruises happened to have a ship in port behind her as they prepared to accept another round of vacationers heading off to somewhere fun. There happened to be a wedding on Queen Mary the day we visited so some areas were closed down for the event but you could still get to most places around the deck.
Queen Mary was a favorite among Hollywood's elite back in the day. People like Walt Disney, Lou Costello, and even Elizabeth Taylor were known to sail aboard the Queen Mary. This history alone could make the ship special to some but what she's really known for was for her service during World War II. With the ability to carry thousands of troops and the quickness to avoid German U-boats, Queen Mary and her sister ship Queen Elizabeth were drafted into the war. Their luxury interiors were gutted and converted to carry the soldiers and the hulls were painted grey. This paint scheme helped to keep the ships invisible against the horizon and helped Queen Mary receive the nickname, the "Grey Ghost." In 1942 she set the record for the most people transported by ship with 16,683 (according to the sign hanging below deck) troops crammed into her frame. That remains a record to this day. 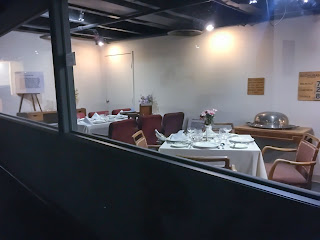 After the war she returned to service as an ocean liner. However, all things must come to an end they say and soon airplanes would take over the international transportation world. Queen Mary would be retired in 1967 and sold to the city of Long Beach, California with plans to make it a hotel. Once again the ship was renovated for different restaurants, museums, and attractions with varying degrees of success. For the most part if you look through the ship's history in Long Beach it's been rough to say the least. But she's still there waiting for you to visit. Maybe you will even spend the night and make your own history. We talked about getting a room here just to say that we did it but now isn't the time. Perhaps in the near future we'll take advantage of her hotel services; perhaps we'll stay sometime in October, near Halloween. You see, the Queen Mary is rumored to be haunted and we're open to exploring creepy places as much as we like exploring history. But that's for another time. If you would like to learn more about the Queen Mary or are interested in visiting on your own you can check out their web site here. See you next week.