Celebrating 50 years of Pirates in Disneyland. 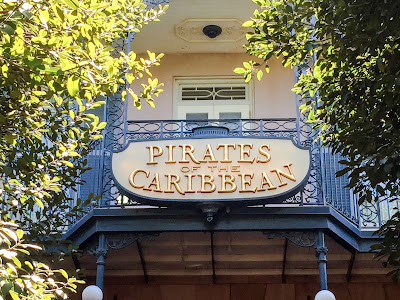 Happy 50th birthday Pirates of the Caribbean.  This ride is special in so many ways.  If you are wiped out from a day of fun in the park then you know the magic of the sweet 13 minutes this smooth sailing ride can offer you.  It inspired a handful of hit movies and a song we all love to sing.  The thing that makes this ride the most special though is how it started.  This was the very last ride in Disneyland park that Walt Disney himself participated in designing.  Originally planned to be a wax walk through attraction, it was switched over to a boat ride after seeing the success of the ride Its a Small World.  The ride opened on March 18th, 1967, just three months after Walt's death.   Many of us of have passed through the same wooden doors, walked the same wooden floor boards and stepped into the small boats visible only because of the low lit lanterns hanging above. The eerie site of the dark bayou and the distant screams of those that passed before you make your stomach flutter a little as you sit down. Despite being here before, the anticipation has you squirming a bit in your seat. You can smell the dampness and hear the splashes of the water as you enter the building but at the same time aromas of Monte Cristo's and other delectable dishes tease your nose and remind you that you are actually in a safe place. Someone on the dock waves a hand and the boat heaves forward and you and twenty of your closest friends are off for a thirteen minute adventure into the darkness. What lies ahead is a swashbuckling pirate adventure that has been repeated day after day for what has now been 50 years.  You hear a faint banjo plucking away in the distance.  As you round the bend in the serine room you hear the eerie words.


Psst, Avast there.  It be to late to alter course, matey's.  And there be plundering pirates lurkin' in every cove, waitin to board.  Sit closer together and keep your ruddy hands in board.  That be the best way to repel boarders.  And mark well me words, mateys: Dead men tell no tales!  Ye come seekin adventure and salty old pirates, eh? Sure, you come to the proper place.  But keep a weather eye open, mates, and hold on tight with both hands if you please.  There be squalls ahead! And Davy Jones waiting for them what don't obey. 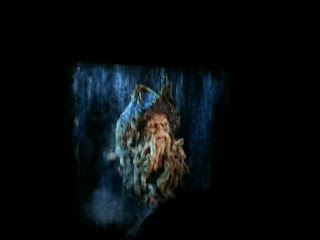 The skull is done talking but its too late to heed his warning.  The music begins and you drop down the waterfall into your buccaneer adventure.  You float past visions of a pirates end.  A ghostly pirate skeleton still stands at the helm of his pirate vessel.  A treasure room teases your richest desires.  A warning pours out from a ghostly fog.  Davy Jones him self utters a chilling warning "if ye be brave or fool enough to face a pirates curse, proceed".  You are carried through the mist and you enter a world of pirates. 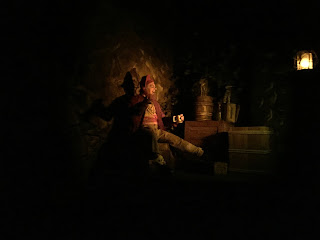 You know the story.  Treasure, rum and a little old time fun.  Now Jack Sparrow hides through the adventure but it wasn't always this way.  Staying true to the classic story line his character was added shortly after the huge success of the ride inspired movie, Pirates of the Caribbean: The Curse of the Black Pearl . Jack is just one of the latest characters to be added to an already stellar group of pirates. His predecessors include an auctioneer that has spent his years trying to sell off his portly prized woman, a man passed out with the pigs, and three imprisoned souls pleading with a fluffy dog holding the cell's key in his teeth. While some things change, others will remain the same I suppose. 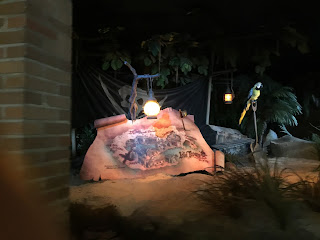 Of course to celebrate Disneyland has added new items to purchase.  Lost Treasure Beignets flavored with just a touch of lemon and gold dusted churro's tempt your sweet tooth.  Caribbean Breakfast Burritos and Buccaneer Pulled Pork Sandwiches will fill you up.  At the Mint Julep Bar a Jolly Roger Punch, featuring a tropical blend of juices, will wet your whistle.  You can also purchase a Pirates of the Caribbean themed stein.  All of these are very limited editions so if you are seeking these treasures you had better hurry. 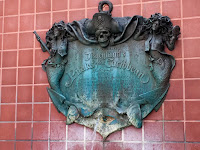 Disneyland is a place of details.  Everywhere you look there are new things to discover.  In the line to Pirates of the Caribbean there is a plaque.  This plaque has a spout that pours into a fountain placed in the center of the line queue area.  I have walked by it a hundred times or more and never stopped to read the words.  30th anniversary, Disneyland's Pirates of the Caribbean.  1967 - 1997.  Honoring Walt Disney's Buccaneer Crew.  The names are listed and covered with time.

Time keeps tickling away.  I wonder how we will celebrate the next big milestone of this beloved ride?  I am excited to see the day.  Until then make the memories in the moments you're given.