It's another holiday that we all either love or hate.  If you hate to wear green then you are probably on the haters team.  Yes, I'm talking about St Patrick's day, the day we all get to be Irish even if were not.  As a kid I remember my biggest concern was making sure I had visible green so I didn't get pinched.  It was a simple concept.  My kids used to leave pennies out for the magical leprechauns.  I guess if you leave them pennies they will take the pennies and leave a prize.  Guess what, our leprechauns never got the memo.  Turns out you need to get the parents involved as well.  Wink wink.

We all celebrate the holiday a little bit different.  My brother and his wife live in the windy city of Chicago.  Chicago has a rich Irish history they celebrate every year. On the Saturday before St Patrick's day they continue a tradition 50 years in the making.  They dye the Chicago River green using 40 pounds of powdered vegetable dye.  Its quite a site to see and one I would love to see my self someday.  For now I can read all about it on my brothers blog.  You can read it yourself here using this link.  Along with the river dying they also have a huge parade and a day full of festivities.  No worries guys, the environmentalists believe the green dye to be safe and are okay with the fun.


Here at our house we are playing it low key.  Of course we will have our green on so the kids don't pinch us.  We will be eating Irish all day.  For breakfast we will be having Boxty.  Boxty's are savory pancakes made with a base of potatoes.  Its a little bit like eating a hash brown pancake.  Lunch will be packed in a cooler and taken to work so there I will have a corned beef sandwich.  Dinner will be our feast.  We will be having Shepard's Pie, Colcannon, Irish Soda Bread and Leprechaun Punch.  Colcannon is a blend of mashed potatoes, cabbage, garlic and leeks.  This will be a first time treat for us.  Leprechaun punch is lime sherbet and a lemon lime soda combination. 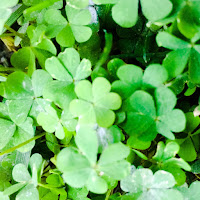 What are we really celebrating?  St Patrick's day, or the Feast of St Patrick, is celebrated every March 17th, on the anniversary of his death.  This falls during the Christian season of Lent.  Historically Lent prohibited eating meat, but on this celebratory day it was waved and a traditional Irish feast was had. St Patrick is the patron saint and national apostle of Ireland. When he was about 16, he was captured by Irish raiders from his home in Britain.  He was held as a slave for six years until he escaped. He later returned and was credited with bringing Christianity to the Irish people.  The most well known legend is how he explained the Holy Trinity using the three leaves of a native Irish clover, the Shamrock.

So what does all of that have to do with wearing green and pinching people? Absolutely nothing. You're supposed to wear green to hide from pinch happy leprechauns who like to sneak up and pinch people. I just want to catch one of the little buggers for his pot o gold but so far there's been no luck on that prospect.

No matter how you spend your St Patrick's day make sure to make it fun and safe. Don't over do it on the pints and watch your back, you never know where those green wearing little pinchers may be hiding. See you next week.