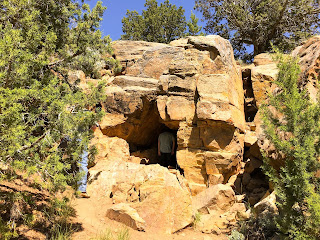 We've all heard of Egyptian hieroglyphics. They were one of my favorite things to learn about in school. You know, King Tut the boy king and such. Treasures of gold and mummies encased within walls of stone and carefully carved and painted symbols that told the stories of the pharaohs entombed inside. Seeing them in person is a dream of mine that I hope to fulfill sometime in my life but we'll just have to see how that pans out later.
Scattered across the southwestern United States there are petroglyphs carved into the sandstone by ancient Native American peoples that told of the animals and the men that hunted them and who knows what else. They honestly don't really know. Modern man can only take an educated guess at what they mean. As a story teller I believe that hieroglyphics and petroglyphs are simply man's way of telling their story just like those of us today that use social media. Okay that's a stretch but you get the idea. We recently visited a small panel of hieroglyphics in central Utah that have also held tight their secret meanings and that's our topic of the day. 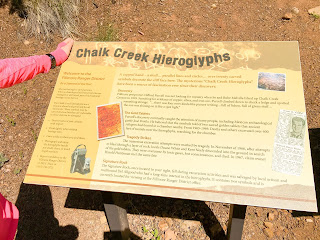 The Chalk Creek Hieroglyphs are located just a few miles east of the rural town of Fillmore, Utah and are accessed off of an dirt ATV trail. These hieroglyphs have an interesting history of discovery, dispute, and death. No one has ever officially broken the code of the hieroglyphs but one man thought he had. Jose Davila, from Mexico found his way to Fillmore more or less by chance. When he saw the hieroglyphs he was sure he could translate them. This is because he had dealt with similar symbols in South America. He believed these carvings were what is referred to as Nephite reformed Egyptian to which there is an example of in the Pearl of Great Price in the Book of Mormon. Jose claimed that he could decipher these symbols and once he did, he learned that buried in the hillside are some sacred records. These are believed to be records that would interest the Church of Jesus Christ of Latter Day Saints (Mormons.) Jose believed that these records were from the lost tribe known as the Nephites. 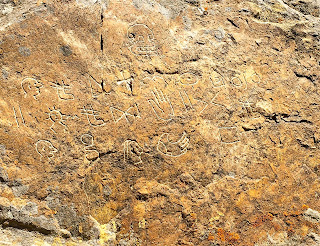 The hieroglyphs told of how to locate the entrance to a chamber that held the records and with some help, Jose started the excavation. They had reached 80 feet deep and 20 feet wide when tragedy struck. Two men were killed by poisonous gas after being lowered into a shaft that had been blasted open. This was on a Sunday which was taboo. Sunday is the day of rest and to Jose working on Sunday is breaking the Sabbath day, something frowned upon by God. This tragedy and other legal battles from outside sources trying to weasel their way in to fame and glory caused the project to grind to a halt. Jose would eventually return to excavate and through some research determined that he had made some miscalculations and was digging in the wrong place. Jose ended up running out of money and returned to Mexico dejected and shamed by his fellow church members. Jose was LDS which was part of the reason the project meant so much to him.
People have debated whether or not Jose really did decipher the hieroglyphs. Some thought he was just plain crazy. Others however believe that Jose was on to something and that there may actually be something buried beneath those rocks. Today we can visit the site and see the symbols for ourselves and speculate. I believe that if there is something buried there we must not be ready to receive the information. Perhaps, in time, when the Lord see's fit, we'll get to see what's down there. Until then we'll just keep visiting from the comfort of our ATV's and wonder. To read a more detailed account of Jose Davila you can visit the article I found to be the most informative here. 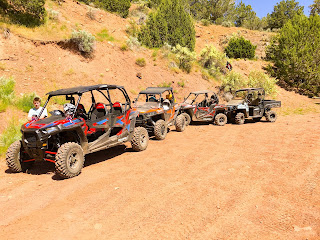