This week the post may look a bit different as I try something new. For this post I'm directly putting my daily log of our trip straight to the blog. I feel like this will convey exactly what I was feeling while we were on the ship because I wrote Day 3 and Day 4 at night before bed. It let's you into my head a little more than just me telling a story so we'll give it a try for this week and see how it goes. Enjoy!
Day 3- Juneau
Getting a good night sleep seemed to evade me last night. I planned to hit the pillow shortly after dinner but it turned out that I had different plans. Early on day 2 my daughter had heard from one of the crewmen that there might be a chance to see the aurora bori alias sometime after midnight. Chance being the key word. Faith really wanted to see this and she made me promise to wake her up at midnight to see what we could see. Being a good dad, I agreed to do so. Funny thing about the northern lights and Alaska, you are at the mercy of nature and whether or not she wants you to witness them. The other is weather. There’s one thing about Alaska that everyone should know about traveling to Alaska. You are very likely to get rained on. It has been cloudy since we landed in Anchorage and after checking the weather I’m confident that we are not going to see the sun until we return to California. However, being the good dad, I stayed up until the magical hour of midnight and snuck out onto the deck to see what the sky had to offer us. Turned out that the clouds were too thick and nature had no interest in showing off.
I returned to our state room and woke Faith up to break the news. She opened her eyes and stared at me as I recited my well rehearsed speech. I had to let her down easy so I chose my words carefully. After delivering the message her eyes closed and her head collapsed back into the pillow without a whimper. That was easy. Part of me hoped there was going to be a little more drama. After all, I had stayed up late to keep my promise and I was every bit as disappointed as she was supposed to be about not getting to see the shimmering sky and after I told her the bad news she acted like it was no biggie. Oh well. Good dad needed to sleep and I agreed it really was not a big deal.
Thirty minutes before the alarm was set to sound I woke up. Hello 5:30 am. I like to hit the buffet right as it opens because most of these folks feel that being on vacation means sleeping in and relaxing. Good for them. I say, early bird gets the worm and eats his meal without crowds, commotion and snot nosed kids so at 7:00 am I’m there waiting for the doors to open. Well after showering I woke the kids and soon my grumbling daughter was upset with me. The good dad. What the hell? It took her a few minutes to come out with it but when she did it turned out that she was mad at me for not waking her up last night to see the northern lights. Of course, she didn’t believe me when I told her the story about waking her up. Lucky for me, Misty had woken up and witnessed the incident and confirmed my story. Yes. Still a good dad.
At 10:00 am we left the port on a bus headed 12 miles out of Juneau to see the Mendenhall Glacier. This glacier is one of 38 that originate from the Juneau Ice Field. Because of it’s convenient proximity to town it is one of the most popular sites to visit in Juneau. You can access it by land and visit the tiny visitor center that will tell you all about glaciers and the wildlife that live near it or if you are a little more adventurous you can take a kayak or canoe and get even closer to the glacier.
Mendenhall, while not as tall at the (point of contact with the sea) as Hubbard, actually looks more ominous to me. Hubbard spread out at a more even elevation before climbing into the mountains. Mendenhall looked more like a stepped waterfall cascading down a tall mountain that had frozen over. You had a sense of the mass of ice that could crush every little thing that happened to be in it’s patch if it were possible for it to all let go at once.
Now I know I said that the clouds were bad for northern lights and that is true but it turns out that it is good for glaciers. Or at least glacier photography. We were there on the perfect day to see the deep blues of the older, denser ice because there wasn’t as many sun rays that the ice would have to reflect.
Mendenhall is a receding glacier meaning that it is shrinking. There is both good and bad about receding glaciers but I’m not getting into that. One of the neat things about it though is what it has left behind. The rocks surrounding the visitor center show evidence of the violent punishment the movement of the ice causes to the rock face. The rocks are smooth but have defined lines running in one direction similar to what it looks like when you drag a yard rake across your garden bed. I thought of it as a kind of natural artwork. It was cool. 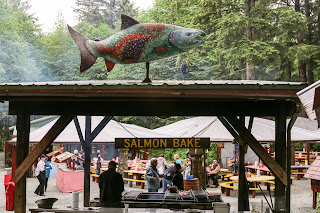 After the glacier we got back on our bus and proceeded to a salmon bake. Yup we were dropped off into a small, wooded area full of wooden tables and benches covered with canopies to keep any inclement weather from ruining your experience. Live music, outdoor cooking and a campfire are all you need for this experience. You could choose from salmon or chicken to go with your thick corn bread, ceasar salad, baked beans and rice. Despite not being a fan of salmon I chose to try it and wasn’t exactly disappointed. It had a sweet glaze that almost…almost hid the fact that I was eating fish. The entire meal was good and the blueberry cake that was dessert satisfied my sweet tooth. 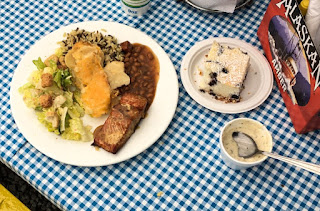 After lunch Misty found out that there was a little waterfall located at the back of the property where a stack of gold pans were waiting for her to try her hand at an old trade. She had always wanted to gold pan in Alaska and this was literally the real deal. Grab your pan and shovel some dirt into it and go to town. She enjoyed herself while the rest of us took photos of the waterfall and watched her in anticipation. Unfortunately it appears that that claim is all used up and we pulled Misty out of the river to head back to Juneau albeit empty handed. Maybe she’ll have better luck at the casino on the ship later.
We explored the shops in downtown Juneau as you do on a cruise. Jewelry, T-shirts and local foods line the streets as they do in any other port city but other than a few squares of fudge we didn’t find anything we just had to have. Instead we headed back to the ship where Misty and her mom went to the spa and the rest of us relaxed and waited for dinner.
We chose to do dinner in the buffet rather than the main dining room because the comedy show happened to be at the same time our dinner was. There are two dinner times for guests aboard a cruise ship. Typically these times are 5:00 pm and 8:00 pm. You get to choose what time you prefer until the time slots are full. Guess what? The 5 pm time slot was full when we booked and in case you were wondering, many of the activities on board the ship begin around 7:00 pm and go until about 11:00 pm. The food was okay and the comedians were funny. Well, how can two guys that juggle and unicycle on a moving ship not be funny? 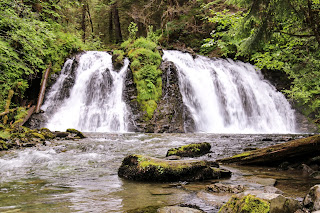 We have an early excursion tomorrow so we need to get some rest. Tomorrow we’re in Skagway where we’ll visit Liarsville and take a ride on board the White Pass Railroad from Canada back to Skagway. After we’ll hit the streets to explore town.
Brandan
Posted by Route To Adventure at 12:00:00 AM