Day 4-Skagway
On the morning of day 4 we found ourselves up bright and early to meet in the auditorium of the ship to get instructions on our excursion. We were about to take a bus through Skagway, Alaska to a little place called Liarsville. After that we were to be taken to the railroad station to board the White Pass Railroad back to Skagway. Lucky for us they opened up the breakfast buffet an hour early so that we could make our 7:10 departure. 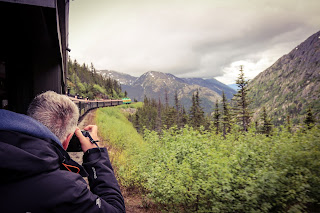 Looking back I think it was a little early for our bus load of cruisers for the Liarsville camp. Actors started us off with a little show that explained a little history of the area through a bit of song and poetry. It was cute enough for the kiddos and had a few adult jokes that should go over most kids’ heads but I thought were a little edgy for the environment we were in. I think it was a little early for our group because there were only 24 of us and it seemed like most of them were still asleep. These kind of cheese ball shows need good audience participation to work and it just wasn’t happening. Despite my best effort to laugh at all the right moments I couldn’t help them save it. My light hearted chuckles sounded forced and full of pity amongst the somber group of twenty five. Heck, even our bus driver was laughing a little extra loud to try to wake these people up. Sorry, bro. These geezers hadn’t had their coffee yet. 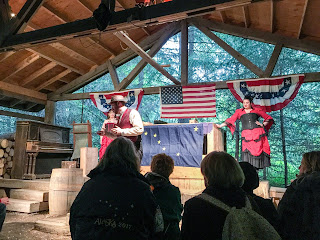 What did wake them up was the chance to do a little gold panning after the show. Each person got to take a pan with a “salted” load of dirt over to the panning station to try their hand at this lost art. “Salted” meaning that there were four or five flakes of gold placed in the pan to ensure everyone found something. The stations are long wooden troughs that stand about counter top height from the ground. The troughs are filled with water and after some instruction you can easily remove the dirt out of the pan revealing the gold flakes caught in the lip of the pan. Some in our group were old pros at this and were able to get this done pretty quickly while others from our group had a bit more of a challenge. Anyway if you did it right you should have walked away with 4 or 5 flakes of good old fashion gold to take home as a souvenir. 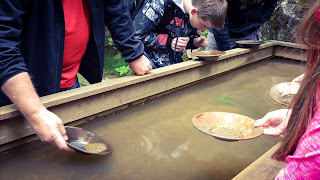 Due to tight scheduling we shuffled back onto the bus and left our friendly “liars” behind us. We had a train to catch. Our bus growled its way up in elevation toward the Canadian border where we would have to clear customs prior to boarding the White Pass Railway for a ride back to Skagway. This winding canyon is the same canyon that thousands of prospectors traversed to reach the gold fields to strike it rich and to change their lives. Today all there is to see is beautiful vistas, rock formations and small lakes. It hasn’t changed much since those days. It’s actually amazing that in this day and age there is still so much untouched land. Well almost. The bus stopped at a small shack in the middle of the road. We were entering Canada. A gruff, quiet gentleman boarded the bus to inspect everyone’s passports. You could tell that he took his job serious by the look on his face and he seemed to enjoy having the power to ruin your vacation if you had mistakenly left your passport on the bus. Typical cop (just kidding, I love you guys.) Although he may be angry because he was stuck working in the middle of nowhere in freezing temperatures checking passports all day. I’m not sure. Without much of a word from him we were cleared and he stepped off the bus. We then made a U-turn around the shack and pulled into the parking lot next to our waiting train. 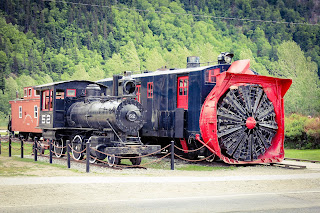 The old train was like any other vintage train I had been on before, narrow, rickety and stale smelling. But we were free to take as much bottled water as we wanted which was nice. In the back of the car sat a heater in which I’m fairly certain everyone aboard was thankful for. To this point I had only been wearing my favorite hoodie and I had decided to spend as much time outside of the train as possible. There was two problems with this, however. First, we were allowed to step out onto the front or rear platform of the railroad car. Each of the platforms topped out at around twenty four square feet or roughly the size of a small closet. You could not pass between cars though. That would get you into trouble although I’m not exactly sure what they would do if they caught you. Most people decided to stay in their seats and enjoy the canyon views from the large windows. The four or five of us crazy folk stayed out on the platform to take pictures and video. Why so few people? It was too cold to spend much time out there. It put my hoodie and my resolve to the test. I’m used to working outdoors during the winter but I think my twelve months in California has weakened me. It had been a long time since I’d felt it that cold. But I toughed it out and got the photo documentation that I crave.
Back in Skagway the train dropped us off a few hundred yards from Main Street so we walked the shops in town. We weren’t swayed into buying jewelry or Ulu knives at this port of call. No we chose to find ourselves some waterproof, insulated jackets that would get us through the week, embroidered with an Alaskan logo of course. Hey, when the forecast calls for rain all over Alaska for the next few days and the price tag is below twenty bucks you jump on it.
I think I like Skagway the best. It has history and the town embraces it. Historic buildings and trains are scattered around town and its small size makes me feel at home. It would be hard to make a life there full time though. During the winter only 800 residents stick around. The grocery stores take turns being open as some type of fair trade deal that could only be brokered in a town like this. But again, it’s part of the charm. 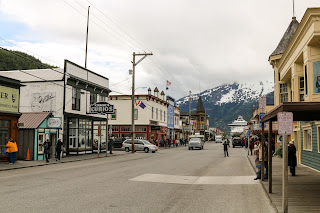 Well tomorrow we go to Icy Strait Point where we will jump onto a smaller boat and go in search of the illusive humpback whale. Well, maybe not illusive, they guarantee we’ll see one. Sounds a bit arrogant doesn’t it? We’ll see about that.