At three years old I was first placed aboard a Honda 70 ATC; a small, three wheeled OHV popular back in the early 1980's. I would dare to say that many people of my age may have had a similar experience and most of them probably own some form of ATV now in adulthood. Why wouldn't we? They are fun, fast and take us away from the mundane world. Not unlike street bikes, ATV's signal a type of freedom that radiates through us as we ride. Alone in our thoughts but surrounded by family and friends we explore the narrower nooks and crannies of the world that we wouldn't be able to visit without long and strenuous hikes. ATV's are light, agile and even utilitarian around the farm and they have been apart of my life for over 35 years. We have had many brands and styles of motorcycles and ATV's throughout the years and we've even had a few snowmobiles sprinkled in there, although not currently. We may have to do something about that.
In 2009 my dad purchased the first sport UTV, a Polaris RZR. Side by side OHV's were not new when the RZR was introduced in 2007 but this was the first sport model. I wasn't sold. In fact, I had no use for them. I was still blinded by love when it came to my standard 4 wheeler or "quad." I couldn't imagine why anyone would want to buy a larger, less agile machine. I'm pretty sure I drove his RZR up and down the street in front of his house and promptly got out and said something like, "Garbage. You can have it." 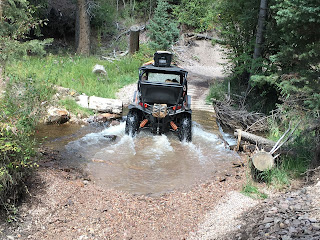 Yep I was content with having my own ride. We had a way of doing things that didn't involve having passengers. We did fine taking turns riding while the others watched the kids. Not everyone wanted to ride at the same time anyway. At least that's what I thought (and I'm a guy and a slow learner.)
2014 came along and so did another RZR. This time it had 4 seats. Great. Now the wife and kids could come along on rides and our groups got larger. What the heck just happened? This was change and I still wasn't having it. I refused to drive or ride in this new abomination. I recall defiantly pleading my case to the masses. "That thing is almost as big as the Jeep. If you want to go out for a Jeep ride then let's go hop in the Jeeps." It made no sense to me. Don't get me wrong. I was happy that all of the family could ride at once but I just couldn't agree with the thought of these side by sides and it sickened me that they were getting so popular. Standing by my principals I continued to ride my Yamaha Grizzly while Misty and the kids tagged along in the four seat RZR and my parents trailed behind in the two seater and my in laws had their quads. Everyone was happy. 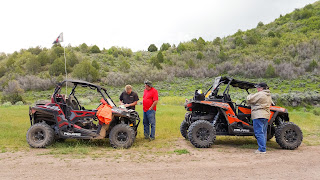 Life has a funny way of bringing humility to a man. A day comes when you have a thought, an idea that you can't seem to shake. The circumstances surrounding the idea change the dynamics of your life and eventually your stances on issues have to evolve. Yep this is the proverbial act of "eating crow." I decided to take my writing and photography more serious. I wanted to create a website and a YouTube channel that would allow me to share my adventures with the world. It would be fun but it would mean that I would have to focus on using cameras more than driving. Sure I could do both but it would be difficult. The day came when we were taking the "bikes" out for a day and I was going to learn how to use my GoPro and take photos. With a little reluctance I left the Grizzly at home in the garage and spent the day as a passenger in the evil RZR 4. I spent so much time trying new camera angles and mounting locations I didn't even miss driving. In fact, I had a ball. I had spent years having to be "the driver" that I never entertained the thought that riding along would be just as fun.
We are now on our second RZR 4, known to us as Spidey to it's red and blue paint scheme. He's only got about twenty hours on him and we're still getting to know each other despite us purchasing it last year (this California thing is really a pain in the...) The sad thing is that I haven't even registered, let alone rode my Grizzly for two years now.  That will all change once I get back to Utah, however. I've got a plan to integrate it back into our storytelling. Which makes me happy because I really do like to ride it.
When you feel the need to see the back country a little faster or you just have to see what's over that next sand dune a side by side can get you there. I never thought they would become as popular as they are but now that we've had them I get it. In the end what I like about them best is the fact that my little family of four can all ride together. Yep, the one thing that a youthful, selfish me didn't want to see happen is the very reason that machines like the Polaris RZR exists. They have brought family's together in the outdoors and to me that's the way it should be. Thank you to those manufacturers out there that continue to innovate and give us opportunities to be together.
By the way, we aren't sponsored by any of the manufacturers mentioned in this article. I speak from the experiences I've had from the machines that we've purchased privately and I am familiar with. See you on the trails.