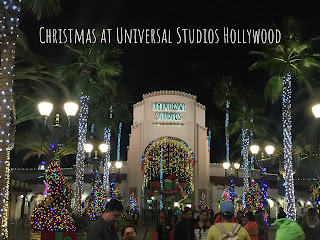 Its the most wonderful time of the year and we are enjoying every second of it.  We got to see Josh and Erin, who we don't get to see nearly enough.  They came from their big city of (just outside of) Chicago to our big city of (just outside of) LA.  Considering we are all from the slower paced less crazy busy Utah this has been an different adventure for all of us.  We miss them terribly like we do all of our friends and family, but we are so grateful for technology that allows us to chat when ever we want.  Face to face is always a thousand times better though and we are sad to say they took that plane back home and we probably wont see them again until spring. 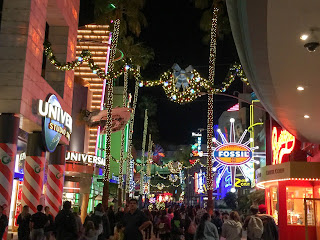 For our quick weekend with them we hit the theme parks to see what they had cooked up for Christmas magic.  Universal Studios Hollywood was our day 1.  Now through January 7th 2018 Universal is in full holiday mode.  We usually park in general parking so we can scope out whats new in Universal City Walk.  Sometimes I am tempted to park in preferred because the walk to the car is so much easier after a day of theme park rush. 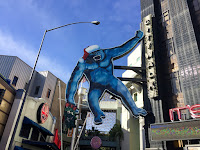 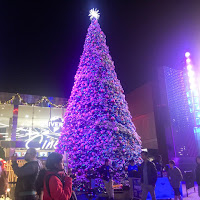 I am so glad we didn't choose that option this day.  City Walk was decorated in every corner.
Even King Kong was dressed up in his favorite Santa hat for the occasion.  The tree out in front of the Universal Cinemas towers above the entire walkway.  At night they had a DJ and a dance party in the tree lights glow.  It was a nonstop party the whole way around and we haven't even entered the park yet. 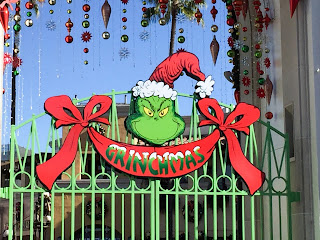 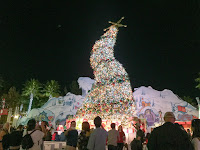 They must have known that Brandan would be joining us after work.  We have to send him there to keep up with my theme park habit, or that is what he tells me anyway.  The front gates greeted us with a giant Grinchmas sign.  We are still waiting for Brandans heart to grow but for now we will enjoy the Grinch story and have hope.  Grinchmas is a full on party with storytime told by Cindy Lou Who her self.  You can also see the Martha May Who-vier and the Who-Dolls revue, decorate ornaments and have a photo op with the king of Grinchmas himself.  Its a party and a half but only on select days.  It runs on Dec 2,3,9,10 and the 15th -31st. 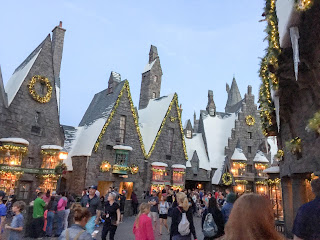 After you leave the world of the Who's you can cross the park to see Christmas in the Wizarding World of Harry Potter.  The streets of Hogsmeade are magically covered in snow even though it hit the 80's while we were visiting.  That didn't stop us from enjoying a hot Butterbeer though.  Our personal opinion is to try one frozen Butterbeer and then one Hot later on in the day when its offered.  After you have had those options the regular old Butterbeer is just that, regular but still great.  The land was filled with all things Christmas but don't try to get a soda here.  There is no soda in the land.  We were told exactly that when we stopped to have the Great Feast for lunch at the Three Broomsticks.  I had to wait until we left the land to get my magic cup refilled. 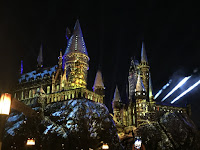 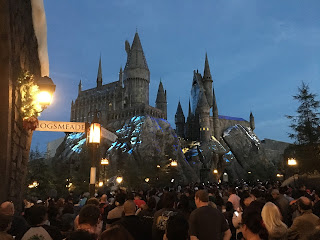 You know how it is when you think you have seen it all only to be surprised that they created something new.  Its like when you are a kid and you go to bed knowing that there are exactly three presents under the tree for you only to wake up and see that Santa has stopped by and poured out treasures for you.  Yes, it was kinda like that.  The Hogwarts Castle is amazing.  I love to stare at the tiny details the put in.  I had no idea they could improve on it any more.  Then they did this.  See that snow?  Its all done by magic.  It grew to be more and more snow right before our eyes.  Christmas in the Wizarding World of Harry Potter brings you right into the magic like you can't imagine.  Don't fret if you cant get here though.  We filmed the show to share the magic with you all.