Party with the Pirates 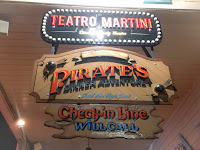 This is something that has been on our bucket list for a long time.  Dinner with pirates and a show!  We finally made it out and we were not disappointed.  Pirates Dinner Adventure is located in Buena Park right by Knott's Berry Farm and just about 15 minutes away from Disneyland.  If you are on a trip its an easy addition to your fun.  They often have deals offered at Groupon as well but these don't seem to offer the flexibility to pick your time if that matters to you.  We spent the day at Disneyland and this was a nice chance to sit down for a while after a day on our feet. 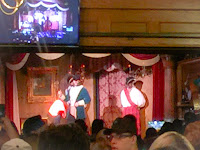 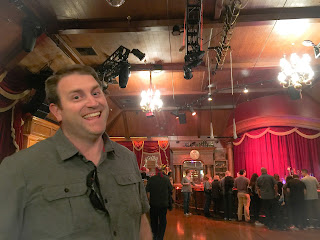 After checking in at the outside window you get your picture taken with your group.  You will have a chance later to buy this picture.  From there you walk in the door and you are in a large open room.  Straight in front of you is a bar with these leg and boot glasses that looked awesome.  If you turn to your right there is a gift shop.  All rides end in a gift shop right? same concept.  This is where the restrooms are located.  To your left is another bar and a stage.  (Brandan is standing in the open space by the second bar and stage in the picture above).  As you wander around this space there are people walking around with trays of treats.  We had a piece of bread with ham and cheese on it and a small plate of veggies with optional ranch.  I passed on the ranch this time thinking I was making a healthy choice.  Choose the ranch!  I had it later on my salad and it is chug-able good!  At around 7:30 the pre-show started on that same little stage Brandan was so excited to see.  The room filled up and the stage wasn't the easiest thing to see but they have TVs set up all over to see the show so you don't miss a thing.

The pre-show introduced us to the cast of characters and let us in on a little surprise.  The group of guys there to protect the princess were pirates and we were being Shanghaied.  When you check in you are assigned a color section and a table.  As your colored pirate leads his crew out of the pre-show you just follow him to your section.  It was a bit of chaos but really as long as you know your color you will be fine.  Don't stress on keeping up with the mad rush.  You are being kidnapped so they aren't going to let you get away. 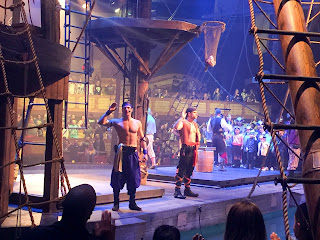 I am totally struggling with how much to say here.  This is a cool show and I don't want to tell everyone too much and ruin the surprises.  The stage is the deck of a pirate ship.  There are ropes and pillars everywhere.  There is a sea surrounding it and you are just on the other side of that sea cheering on your team.  See that hunky guy in the blue pants that at some point lost his shirt in the show?  That is Benjamin and he was ours.  As the show got started he took the time to stop and talk to everyone in his area.  You are really made to feel like you are part of the show in every way.  They took the time to announce those who were there celebrating big events, birthdays and anniversaries.  The picture you see is off a handful of people (children) from each section.  They referred to them as the Poopy Pants Pirates through the show. 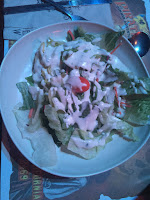 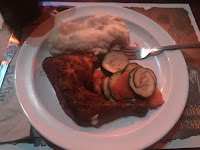 When you reserve your adventure you will also pick your meals.  You can choose from the Adult meal (chicken, shrimp, mashed potatoes, veggies) the Vegetarian meal (Squash Ravioli with a house made sauce) or the Vegan (stacked roasted veggies) and a Gluten free option which is the same as the adult meal but you get a slushie instead of dessert. 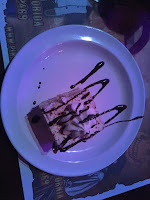 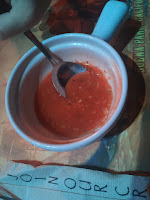 Soup, an awesome tomato, or salad with heavenly ranch dressing is given at first.  You end the meal with a Tres Leches cake drizzled with chocolate sauce.  Children get chicken nuggets, mashed potatoes, mac n cheese and fruit.  The meal was pretty good.  Not the focus of the evening but we were all well fed.  Drinks are Pepsi products so I came packing my own Diet Coke.  Its just not worth the sacrifice to drink a Pepsi.  😉 Okay, I happened to have a Diet Coke with me, they did have water and lemonade as well and if it really came down to it a Pepsi wouldn't kill me.  At the end of the night they offered coffee. 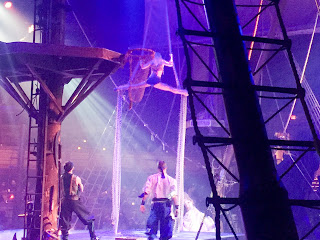 With out telling too much of the story I will say that there was a lot of fighting, sword play, swinging by ropes, music, a love story and jokes at every turn. The highlight of the show for me was the amazing acrobatic show put on by the gypsy.  She of course falls in love and with her new found love they put on an show tumbling and manipulating ropes with no net in sight.  It was indescribable but we did get a bit of it on video.  Not enough to ruin the show but enough to get you excited to go see the show for yourself.  Check the bottom of the post for the link to the video. 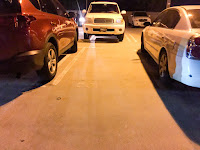 Do yourself a favor and call an Uber.  Parking is not the easiest thing here.  We did go to the 8:00 pm Saturday show so the lot was still full from the 5:00 pm show when we arrived at 6:30.  They did have a few spots available if your car was well under the size of a Prius and you don't mind exiting through an open window.  There are larger spots available but the whole lot was a tight fit and there are only so many spots to go around.  We decided to drive around for about 20 minutes to give a chance for some spots to open and all was well.  But seriously, if you can use other transportation I think it would have served us well.

Overall it was a blast and a half.  In the fall they do a Vampirates show I am so excited to go to.  They also do a Christmas show.  For now we get to see them take on a sea monster and it was a great night of entertainment.

On to the next adventure.  See you soon.
❤ Misty.

Email ThisBlogThis!Share to TwitterShare to FacebookShare to Pinterest
Labels: Disneyland