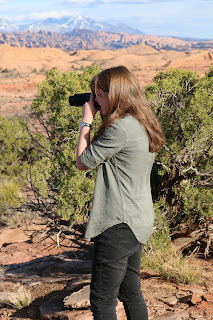 Did you miss us? We’ve had a lot of things going on and it may seem like we’ve been neglecting our travel duties. Well, we have, but we’re back to brining you more fun stories from our adventures. We have been from the beaches of California up to the red rocks of Utah and even as far as the powerhouse that is Disney World in Florida. Yes we have been very busy and we will share it all here in the weeks to come. Today I’m going to start us off in Moab, Utah.
There is a plethora of things to do in Moab, as we’ve discussed in previous articles. There are mountain biking opportunities, hiking trails and more dirt roads than one could possibly explore in a lifetime. The Moab area is also a popular place for photographers to go hog wild with endless vistas and geological features to keep your creativity flowing for days on end. This year we decided that we would have a little fun and have a little friendly competition to make things a little more interesting. We picked a theme for each day that we were there and the only rules were that the photos had to be unedited outside of the camera settings. I’m putting the best out for you to see here in this article. These photos are still unedited and just an example of some of the things we saw during our trip and are examples of how people see the world through their lense.

This shot of slick rock domes and the La Sal mountains in the background is a common one. It's some what a must have shot for visitors of the area. The hard part is deciding which shot is the one for you. Photographer-Teressa Rich, taken at Deadman Point. Theme of the Day: Anything goes.

This is an example of thinking outside the box in my opinion. The day this photo was taken was Action. With all of the Jeep's out on the trails it would be easy to just take a snap shot of a random rock crawler but for my daughter, that wasn't going to cut it. Instead she used Dad's hand and a fidget spinner to mix things up.


Here is another out of the box action shot. Unfortunately these two were tying up a traction bar after it's bracket broke. This is just part of the fun of having off road vehicles despite most breaks happening at very inopportune moments. This break happened about a mile from the end of the trail which made it a lot easier to get it back to town for repairs and thanks to Sue, we'll always have this photo to remember that day.


Dogs are a popular site during the Jeep Safari and why wouldn't they be? They love the outdoors and they're man's best friend. You can't leave your best bro at home, can you? This pup was on his first safari and seemed pretty chill for such a new endeavor.  Theme of the Day: Anything goes.


We had some long days during our safari week. In fact, I think we only got back to the rental house twice before dark during the time we were in town. This gave us opportunities to get some colorful skies as the sun went down. Misty took this photo with an iPhone and in a moving vehicle. Not bad. Theme of the Day: Landscape.

There are two things about this photo that are amusing to me. First, this arch is only about 4 feet long and stands only about 5 feet tall but the angle that I took the photo at makes it look massive. Just goes to show what perspective and composition can do to manipulate reality. The second thing that's funny about it is that I didn't have my Canon with me, only my iPhone and I had forgotten to take my landscape shot for the day. It was the only photo I took all day. I really like how it turned out edited too (not shown.)

The hands down favorite photo of the week was that of a base jumper that happened to leap off of Determination Towers while we were eating lunch. I had some pretty good photos of him but this one taken by my daughter was taken a split second before I began to snap away. Faith was able to catch him just before he tossed his shoot giving this image a bit of intensity as you wonder what is about to happen. He made it to the ground fine, by the way. Well done, Faith. I guess I've learned to never underestimate the competition.


There are plenty of images I could have pulled to showcase in this article but these were some of my favorite ones. This exercise was a way for me to spread my love for photography to my friends and family. It was me wanting to help everyone express themselves and have fun with photography rather than just taking the typical tourist photos. I wanted to add a little focus and purpose to each image and I think we accomplished this. We weren't out to critique each other, only to encourage one another and have a good time. I hope everyone else felt the same at the end of the day and I hope that we can continue this in our travels together. I love to off road, have adventures and photograph every turn along the way. Thanks to those that do the same. See you next time.