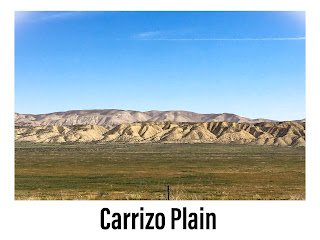 The beauty of nature seems to know no bounds. I’ve seen her at her best in the red rocks of Utah, Southern California beaches and the rugged mountains of Colorado and we all have witnessed her at her most ruthless as earthquakes strike different parts of the world. The current situation in Hawaii is a perfect example of the beauty and destruction that Mother Nature likes to dish out. The lava flows that glow in the night are mesmerizing but the burned houses and displaced residents are an unfortunate side effect. But still, we watch on in awe.
Now, I mentioned earthquakes and as it happens that is the topic for today. Over the past few months I've been fascinated with the San Andreas fault. In fact, I have already written a story about our first visit to the fault not too long ago. If you're interested in that story, you can check it out here.
In my research I found that some of the best views of the fault are found north of Los Angeles county inside the Carrizo Plain National Monument. My goal was to stand on both the North American Plate and the Pacific Plate at the same time. These tectonic plates are moving in opposing directions and are directly responsible for some of the world's most devastating earthquakes. Devastation aside, this stuff is fascinating to me. I don't even know why. But I would not be happy until I could knowingly straddle both plates. This would turn out to be a more difficult task than I thought.
It turns out that the fault is actually very difficult to find. As a matter of fact, after this trip I figured that we crossed the fault at least ten different times. I knew the exact moment we crossed it only twice. It's easy to follow the fault if you look at it on Google Earth. When you're zoomed out you can see a very distinct line that runs up the state of California. In person, though, the fault zone can be extremely wide and filled in with years of sediment. If I hadn't been using a handy guide book, I would have had no clue of what to look for. Luckily, there is one location in the Carrizo Plain that is a prime example of where the fault runs and it's called Wallace Creek.
The highlight of our trip in my opinion, Wallace Creek is an ancient creek bed that is offset by the movement of the San Andreas fault. The hill above the creek allows you to get a good vantage point of how the creek comes out of the mountains and makes an abrupt turn to the north before emptying into the grass valley below. At one time this creek bed emptied straight into the valley but earthquakes over time have split the creek as the Pacific Plate and the North American plate grind past each other. I understand that the fault is creeping along at an average of 1.3 inches per year, but here at Wallace Creek the movement has been drastic during a few earthquakes. One earthquake in January of 1857, the creek shifted 30 feet. That's huge! To put this into a little more perspective, I figured that when this creek bed was still aligned the Great Pyramid in Egypt was already over 1,000 years old. In geological terms, that's really not that long ago.
The Carrizo Plain is a National Monument and there are more of nature's features to see here besides the fault. You can't miss seeing Soda Lake as you travel through the monument. It is a normally dry lake bed that shines white across 3,000 acres of the Carrizo Plain. This is salt left over from the evaporated mineral rich water. Okay, that is a really simplified explanation but you get the drift.
The Carrizo Plain also has a rich history in oil drilling and their is plenty of evidence of this history left behind in the form of rusted equipment and rotting buildings. The area also has Native American history that you can visit. Painted Rock is an area where pictographs can be viewed. This is near Soda Lake and is only opened to the public at certain times of the year. When we visited, sadly, it wasn't open. Perhaps another time. 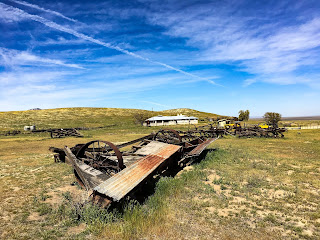 Bottom line here, I found our day in the Carrizo Plain National Monument to be an excellent one. I got to chase the fault through the desert and see some significant evidence of it's existence. We got out of the house and stretched the legs on the Jeep and made a few more memories with the kids.
The Carrizo Plain National Monument is 3 hours north of Los Angeles and sits below the Temblor Mountains. Most of the roads are dirt and may be difficult to pass in the rare rain storm. Don't forget to take extra water and snacks (I would pack a full lunch as well) just in case and make sure you let someone else know that you're going and when you plan to be back. This place is remote and getting help may be difficult. If you leave early enough in the morning you could see the monument in a day but if camping is your thing there is a campground inside the monument. It accepts smaller RV's and tents. So, what are you waiting for? Get out there and explore! See you next week. 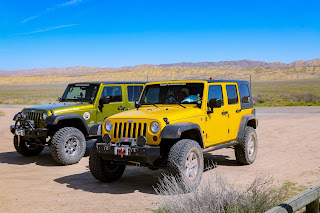